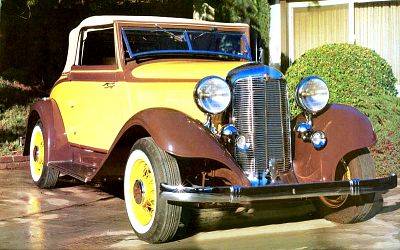 This 1932 DeSoto was considered dramatic for its time. See more classic car pictures.
none

Ironically, DeSoto bowed with the highest new-make sales of its era, only to die of buyer apathy 30 years later. And while the 1932 DeSoto SC Custom convertible coupe priced on the high-end, the DeSoto arrived in August 1928 as Chrysler Corporation's rival to low-priced "light" sixes from Oakland, Hudson, and Studebaker.

Initially placed below Dodge and above Plymouth on the corporate price/prestige ladder, it would eventually be moved up in size and price to become a sort of "junior Chrysler," the niche it occupied for most of its life.

During its first few years, DeSoto shared basic body and chassis design with Plymouth but offered six- instead of four-cylinder power to justify its higher price. This strategy worked very well until the Depression began putting a crimp in DeSoto demand. Seeking to reverse the slide, Chrysler issued a bigger, more stylish DeSoto in 1932.

DeSoto designers made sure every inch of this car was unique -- even the radiator.
none

The DeSoto Model SC "New Six" rode a 112.4-inch wheelbase, 3.4 inches longer than before, and wore a distinctive barrel-shaped radiator said to have been inspired by those on Harry Miller's famed racing cars. A full range of body styles was offered, including sedans, roadsters, coupes, phaetons, and convertibles.

This rare 1932 DeSoto SC Custom convertible coupe is owned by Alex and Beverly Dow of California.
none