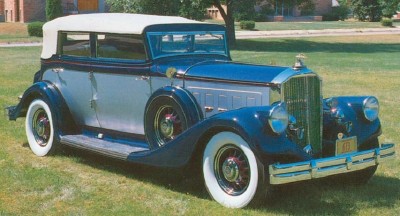 Like the other Classics, the 1933 Pierce-Arrow convertible sedan was heavy: about 5,500 pounds. But it had a 462-cid V-12 generating 175 horses to pull it along. See more classic car pictures.
©Doug Mitchel

The 1932-1938 Pierce Arrow Twelves came out during the Depression. Not infrequently, hard times bring out the best in us -- in corporations as well as in individuals. Consider the case of the Pierce-Arrow Motor Car Company.

In the years leading up to World War I, and for a time thereafter, the Pierce-Arrow was one of America's leading luxury motor cars. More than a few authorities considered it, in fact, to be the best of the lot. Engine displacements, at one time, were as great as 825 cubic inches, and prices for the big Model 66 ranged as high as $8,000, more than twice the cost of corresponding Cadillacs.

But Pierce fell behind the times during the 1920s. While Cadillac was making strides with its fine V-8, and others, notably Packard, set new sales records with powerful straight eights, Pierce-Arrow clung stubbornly to its fine -- but outmoded -- T-head six-cylinder powerplant. A more reasonably priced six, the Series 80, was introduced in 1924, but Pierce's production methods were so leisurely (and yes, painstaking) that it cost at least $300 more than the corresponding Packard Six.

It wasn't until the 1929 models appeared that Pierce-Arrow caught up with the times. Offered that year were two lines of smartly styled straight eights, more powerful than any contemporary American automobile, save only the Duesenberg. And with prices beginning at $2,775, the new model was actually less expensive than its smaller, six-cylinder predecessor.

That year, the company's Buffalo, New York factory was literally unable to keep up with demand. Even after the stock market crash that October, demand remained comparatively strong, enabling Pierce-Arrow to post a 1930 profit of $1.3 million. But then came the inevitable -- sales dropped off sharply, and red ink was seen once more in the company's ledgers. By 1932, production was down to fewer than 2,700 cars, about a third of the 1929 figure, and losses totaled $3 million, a staggering sum for so small a company.

This was all, of course, during the very pit of the Great Depression, hardly the most propitious time for any company to introduce a new, more powerful, more expensive model. But that's what happened in November 1931: Pierce-Arrow announced that two new lines of 12-cylinder cars would soon be put into production, alongside the existing straight eights.

In reality, competitive conditions required that Pierce take such a step. Cadillac had announced its spectacular V-16 two years earlier, and followed it after some months with a fine V-12. Packard was in the process of reviving the Twin Six, Lincoln would have a Twelve of its own for 1932, and of course Marmon was building its superb Sixteen. The new Pierce-Arrow Twelve would be the equal of any of them.

As noted, there were two series of Pierce Twelves. That is to say, there were two 12-cylinder engines. The first of these displaced 398 cubic inches and was rated at 140 horsepower; the second, bored to 429 cubes, developed 150 bhp. Three distinct wheelbase lengths were used, with the 137- and 142-inch chassis employing the smaller engine, while the 147-inch cars received the 150-horse-power version. The 125-bhp straight eights, meanwhile, could be mated with the two shorter chassis.

The two cylinder banks of the V-12 engines were set at an unusual angle of 80 degrees to one another. The compression ratio of 5.1:1 was considerably lower than that of the Packard engine, and the twin Stromberg E-2, 1-1/4-inch carburetors were fed by a camshaft pump. In all of the 1932 Pierce-Arrows, the previous four-speed transmission was replaced by a three-speed unit, which was fitted with a free-wheeling unit.

Read about 1932-1938 Pierce-Arrow Twelve's performance next. 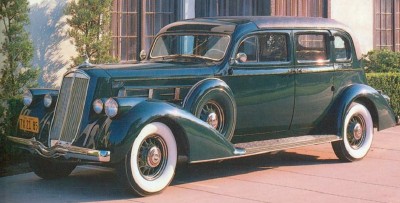 The Sale of Pierce-Arrow

The Silver Arrow was, as Pierce authority Bernard J. Weis has commented, "a far cry from the stately and staid vehicles for which Pierce-Arrow had previously been noted. The traditional fender headlamps, of stock Multi-beam design, were retained but were mounted high in flush-sided front fenders which flowed past the doors and swept downward to an almost-pointed tail. Mounted in the front fender on each side, but concealed by a hinged panel, was a spare tire. The panel latch was released by pulling a handle located inside the car ... "

By anyone's standards, the Silver Arrow was a sensational automobile. Its price was likewise sensational: $10,000, more than three times the tab for the sedan on which it was based. Or, to put the matter in a different perspective, that figure would have covered the cost of 20 Ford V-8 Tudor sedans.

Since mid-1928, the venerable Pierce-Arrow Motor Car Company had been owned by the Studebaker Corporation. The combination had appeared, initially, to be of enormous benefit to both organizations, providing the combined companies with coverage of the entire automobile market except for the lowest-priced field.

But Studebaker's aggressive president, Albert Russel Erskine, over-extended his organization's resources by paying huge dividends out of capital reserves during the Depression, while simultaneously attempting to acquire control of White Motors. As a result, Studebaker lapsed into receivership in 1933, and shortly thereafter Albert Erskine shot himself to death. The future of Pierce-Arrow, as well as that of Studebaker, hung in the balance.

In August of that year a group of Buffalo businessmen purchased Pierce-Arrow from Studebaker's receivers. The price was one million dollars. The new owners calculated that with a bit of belt-tightening they could make the company profitable on an annual production level of as few as 3,000 cars. A degree of optimism returned to Buffalo.

Sadly, however, that goal of 3,000 cars a year was never reached. Only 2,152 Pierce-Arrows were built during and after that it was downhill all the way. The cars were restyled for the line including a fastback model bearing the Silver Arrow name-but unfortunately not its panache. Production, including all models, totaled just 1,740 cars, dropping to 875 the following year.

There was one final effort. For 1936 the company produced what Bernie Weis has called "the finest Pierce-Arrow ever built." Styling, after the fashion of the times, was more streamlined than before. The box girder frame, reinforced by a massive X-member, was stout enough to support a railroad car. The V-12 engine, thanks to a higher 6.4:1 compression ratio, produced 185 horsepower. A Borg-Warner overdrive was fitted to the transmission, permitting speeds as high as 90 miles an hour without strain. From 40 miles per hour, the brakes-the largest of any car on the market-would stop the three-ton Pierce within 68 feet and 2.3 seconds.

But it was all to no avail. Sales that year came to just 787 units. No significant change was made for 1937, as sales continued to slip, this time to 167 cars. And of the nearly identical 1938 models, evidently only 17 were built before the factory was forced to close its doors. The company ceased to function in March 1938, and another great name in automotive lore became history. But at least it had produced great cars, right up to the very end.

Get 1932-1938 Pierce-Arrow Twelve Specifications on the next page. 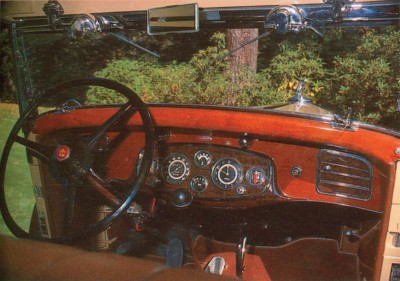 One could argue that the Pierce-Arrow had one of the most beautiful dashboards of its era, what with all the wood, the gauges nicely integrated in their own panel, and just the right touch of bright trim.
©Milton Gene Kieft

The 1932-1938 Pierce-Arrow Twelves were the leading luxury cars of their time. They were known for their powerful, 12-cylinder engines.