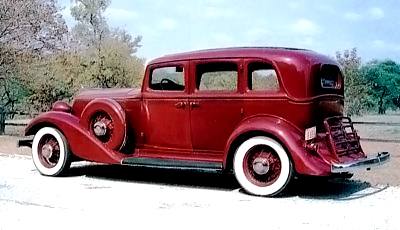 With its skirted fenders widely copied, the 1933 Graham Blue Streak was honestly advertised as "the most imitated car on the road."

For the first-series 1933 line, which debuted in June 1932, the Model 57 was continued essentially unchanged (although no longer called the Blue Streak), as was the leftover conventional Six.

The Model 58, with a 224-cid, 80-bhp six on a 118-inch chassis, was new; its styling blatantly and successfully mimicked the Blue Streak. In addition to a new vacuum clutch, the Six featured a cylinder head composed of an aluminum combustion chamber section and a cast iron cover plate designed to give the best performance possible without requiring anti-knock gasoline.

Priced at $825 to $895, the new Graham Six was a lot of car for the money, sharing as it did most of the styling and engineering features of the Eight.

The new, smaller Six was 300 pounds lighter, thanks to the shorter frame and shorter sedan body, whose rear door measured 2 1/2 inches less in length (also true of the smaller Eight, which shared the smaller body). Both the six- and eight-cylinder carryover engines boasted five additional horses, thanks to improved manifolding and carburetion.

The banjo frame on Models 65 and 64 received a new K-member at the forward end, the legs of which carried the engine mountings. Styling changes included a clever new two-piece front bumper, vee'd in front view and which, due to its angled face plates, offered eight inches of vertical face to mate with other cars' bumpers.

The convertible coupe received a one-piece windshield. Although Graham cars were widely esteemed and imitated, production dropped yet again to 10,967, although Graham-Paige had the satisfaction of somehow contriving to eke out a tiny profit of $67,000.

Well, if stunning styling and advanced engineering weren't enough to lure a sufficient number of paying customers back into Graham showrooms, perhaps a bit of magic would -- the magic of supercharging.

Most car buffs today, when asked about prewar supercharged cars, conjure up Auburn, Cord, and Duesenberg; only the truly knowledgeable will mention Graham. Fact is, between 1934 and 1941, Graham-Paige Motors Corporation built more supercharged cars than all other manufacturers combined.

See what 1934 had in store for the Graham Blue Streak on the next page.