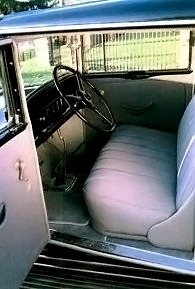 The interior of the $1,225 1932 Graham Blue Streak coupe was quite lavish, although the gauges were placed rather low on the dash.
©2007 Publications International, Ltd.

He was working on his final design surprise, the radical 1938 Graham "sharknose," when in 1936 he slipped and fell on the ice near his Ferndale, Michigan, home and later succumbed to head injury complications. He remains the industry's least known and least appreciated styling genius. The Graham Blue Streak was his finest achievement.

The newness of the Graham Blue Streak, known internally as the Model 57, was more than skin deep. This was thanks to the foresight of the Graham brothers, who in 1928 and 1929 had erected a new two-story engineering building adjacent to their Dearborn, Michigan, factory and connected it to the main offices by an overhead bridge.

The new laboratories were lavishly equipped with four dynamometer rooms; hot, cold, and silent rooms; and one of only four strobe-light installations then extant in the country.

Concealed underneath the Blue Streak's handsome exterior was the first fruit of the Grahams's research investment: a revolutionary new "banjo" frame -- the work of chief engineer Louis Thorns. Its primary innovation lay in the side rails, which had no kick-up at the front, while the rear axle passed through "Banjo" or race track-shaped openings in the rails.

With the frame passing over and under the rear axle, rigidity was increased, as was control over axle movement. This solved a problem common with conventional frames, whose flexing and deflection -- caused by the high kick-ups being weak in torsion (bending) -- allowed the shifting rear axle to break loose on gravel or undulating road surfaces.

Common to this era, the first-series 1933 Graham Blue Streak Series 57 Eight instrument cluster was placed in the middle of the dashboard. The handle at the top opens the windshield for ventilation.
©2007 Publications International, Ltd.

In an interview granted to Jeffrey I. Godshall in the 1970s, former Graham research engineer George Delaney (later Pontiac's chief engineer, 1947-1956) recalled that the new design "required a lot of work to get the bugs out. In testing we found the rear axle would hit the frame on hard bumps, so I designed huge rubber blocks laced with air holes to act as bumpers, sort of variable-rate rubber springs."

"In order to obtain adequate axle-to-frame clearance, the springs were placed outboard of the frame instead of underneath," he continued. "This gave us plenty of room. At the front, for example, the savings in height was 2 1/2 inches -- the thickness of the spring and its mountings." Part of this gain was used to eliminate the front kick-up, and the rest to lower the car.

Compared with previous models, the novel outboard springs were eight inches farther apart in front and three inches farther apart at the rear, giving the Graham Blue Streak a tread of 61 inches rear, 60 5/8 inches front. Graham ads boasted, "The Car Is WIDER Than It Is High."

Despite the advantages of the outboard spring location, there was no rush to imitate. Chevy, for one, didn't use the idea until the first Corvette of 1953, but outboard springs were an integral part of its hot 1955 V-8.

Already the Graham Blue Streak was selling well, but how did it perform? Get details on the next page.