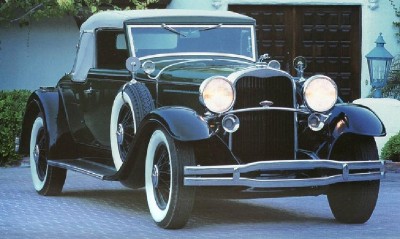 The 1931 Lincoln Model K was produced by one of the two remaining luxury-car marques issued forth from U.S. factories, Cadillac and Lincoln. Apart from the fact of their continued survival, America's two prestige nameplates also share the remarkable coincidence of having the same founder.

Henry Martyn Leland learned precision tool-making in the employ of New England armsmakers during the Civil War, and brought those lessons with him to Detroit, where he began manufacturing machine tools and marine engines in the 1890s. In 1902, he was asked to sort out the affairs of a struggling new carmaker. The resulting enterprise was renamed the Cadillac Automobile Company. William Durant bought Cadillac in 1909 for his General Motors empire.

The engine in the 1931 Lincoln Model K was largely the original Leland design, with a few tweaks.

Leland remained president of Cadillac until 1917 when, in a rancorous split with Durant over the production of aero engines for use in World War I, he left to start his own firm. He named the venture after the U.S. president he admired in his youth: Lincoln. With the war over and the company's aircraft engine contract at an end, Leland and his son formed a new Lincoln Motor Company in January 1920 to manufacture cars.

The first arrived that September with a novel 60-degree V-8 engine and innovative fork-and-blade connecting rods that made truly parallel cylinder banks possible. Financial problems soon arose, however, and early in 1922, Henry Ford purchased the company. The Lelands stayed on, but disagreements with Ford led to their departures within months; Edsel Ford stepped in as the new president.

The 1931 Lincoln Model K was a pricey luxury model.

The Ford regime continued the Lelands' Lincoln through the Twenties. There were improvements, including an engine enlargement, the addition of four-wheel brakes, and an array of bodies built by noted coachworks. But it wasn't until 1931 that Lincoln came in for its first major retooling. Thus was born the Model K.

Underneath was a totally new chassis. Wheelbase shot up nine inches to 145. Aside from getting longer, the new Lincoln became lower, too. Wheel diameter shrank an inch to 19, and lower roof- and beltlines undid the conservatism of the previous Model L. A newly peaked radiator shell sat behind recontoured headlamp buckets affixed to a plated, arched tie bar. Twin chromed trumpet horns were new as well.

The Leland-design V-8 was carried over, but it bore its share of improvements. The engine displaced 385 cubic inches, as it had since 1928, but output jumped by 30 horsepower to 120, thanks to new downdraft carburetion, freer manifolding, and a raft of other upgrades. The three-speed transmission gained freewheeling capability.

Top coachbuilders continued to supply Model K bodies. The car featured here is one of the 275 "convertible roadsters" built by LeBaron. With its rumble seat in use, it could carry up to four passengers. Base price was $4,700.

Who could afford that much car in Depression-wracked America? How about novelist Erle Stanley Gardner, who purchased our featured car with the royalties from the first of his "Perry Mason" stories. Today this true classic belongs to Robert Hannay of Paradise Valley, Arizona.