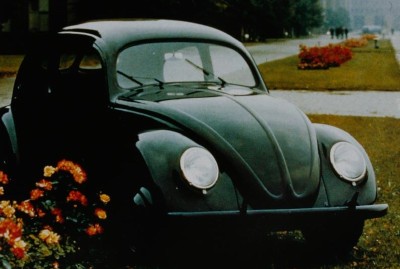 The final years of World War II had a devastating effect on the 1944-1945 Volkswagen Beetle, but the popular little car found a way to persevere.

In late 1944, the Porsches and their staff evacuated to the family estate at Zell am See, Austria, where son Ferry, Karl Rabe, and Erwin Komenda would fashion the first Porsche automobile. The tide of war had turned, and more than two-thirds of the Volkswagen KdF factory lay in ruins.

By spring 1945, with American troops advancing, some workers, including many Nazi-sentenced slave laborers, began destroying as much as they could of what little was left. In one of history's stranger moments, a few English-speaking expatriates actually sought out and surrendered to an American column a full four weeks before V-E Day.

With the partition of Germany, KdF-Stadt was renamed Wolfsburg and came under Allied protection, though it would have been in the Russian Zone had it been located just 10 miles further east. Because Britain and not the U.S. had charge of the region, the future of the Volkswagen Beetle, its factory, and the town fell to a detachment of the Royal Electrical and Mechanical Engineers commanded by Major Ivan Hirst.

Slowly and with great difficulty, Hirst and company got things moving again, providing food and shelter to war-weary inhabitants, restoring heat and electricity, and seeing what might be salvaged of Hitler's automotive dream.

Most successful of the military Volkswagens was the
2007 Publications International, Ltd

As it happened, a surprising amount of tooling and parts had survived Allied bombs, and they were dusted off to build a few more Kubels and even some Volkswagen Beetle sedans for British and French forces in need of light transport. Soon, Hirst had military orders for no fewer than 10,000 vehicles, and his workforce quickly grew from just 450 (versus some 16,000 in wartime) to over 6,000.

By the end of 1945 they had built either 1,785 or 2,490 vehicles (records vary). Somehow, after the most horrific war in history, the modest Wagen fur das Volk was still alive.