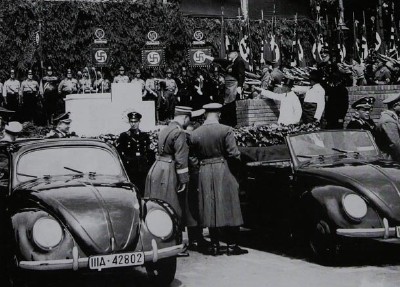 With much fanfare, Adolf Hitler on May 26, 1938, presided over the cornerstone ceremony for the new Volkswagen factory in what would later be called Wolfsburg.
2007 Publications International, Ltd

The development phase covered by the 1937-1940 Volkswagen Beetle included a series of protoypes, a new VW factory, and a prepayment plan designed to help prospective buyers.

After the Volkswagen V3, or KdF-Wagen, was prepared for production, a series of prototypes tagged V30 was next. Though closer still to the eventual Beetle, they lacked a rear window, as had the V3s.

By 1937, Hitler had decided the KdF would be built at a new plant, which would not only remove it from any Reichsverband der Deutsche Automobilindustrie (RDA) influence but create needed local employment.

Land was duly confiscated near Castle Wolfsburg in northern Germany, about 40 miles east of Hanover, and Hitler himself laid the cornerstone on May 26, 1938.

Envisioned as a typical Third Reich monument of heroic proportions, the plant rose quickly on the north side of the vital Mitteland Canal. However, final prototypes, dubbed VW39 and all but identical with the future Volkswagen Beetle, didn't begin testing until July 1939.

Not that it mattered much. With average monthly wages of only RM300, most Germans couldn't hope to buy a KdF outright. The Reich's answer? Pre-pay installments. Prospective buyers received booklets for the pasting in of stamps costing RM5 each (about $1.75). A full booklet, Berlin promised, could be redeemed for one KdF-Wagen.

"The wish of the Führer . . . fulfilled!" shouted propaganda of the time. And shouting there was, Nazi minions boasting of up to a half-million cars a year spewing from the new town of KdF-Stadt (south of the canal), a number as unbelievable as the final DM990 price.

But the first civilian cars weren't built until August 1940, and then only in a trickle. By that time, the Hitler War had been raging almost a year, and KDF-Stadt was ducking British bombs after turning to airplane assemblies, engine parts, stoves, V1 rockets -- and Beetle-based military vehicles.

The last comprised the Type 62 Kubelwagen ("bucket car"), the Wehrmacht's Jeep; the improved Type 82 with engine enlarged from 985 to 1131 ccs; the Type 82E, a KdF sedan body on the high-riding Kubel chassis; the Type 86 Kubel with four-wheel drive instead of rear drive; the Type 87, a 434 82E; and most successful of all, the amphibious Type 166 Schwimmwagen.

Porsche Bureau was heavily involved in engineering all of these (starting as early as 1937), and the 166 pleased Hitler so much that he made Ferdinand an honorary SS officer, thus allowing the postwar French to charge the apolitical Porsche as a collaborator, which he wasn't.