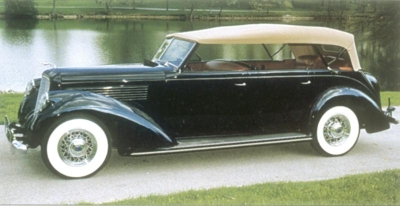 By 1938, touring cars could be had only as a special order; Willoughby built all five such requests.
©2007 Publications International, Ltd.

Only the most modest of changes marked the 1938, 1939, and 1940 Lincoln Model K as sales continued their downward slide until the line was dropped. The 1939s, however, included two of the most famous Lincolns ever built.

One was a special touring car, based on the LeBaron convertible sedan, used by England's King George VI and Queen Elizabeth during their historic June 1939 tour of the U.S. and Canada.

The other special 1939 was a Brunn convertible sedan on a 160-inch commercial chassis built as presidential transport. FDR himself dubbed it the "Sunshine Special," and of the several cars in the White House fleet, this was the one he ordered be flown for use at his wartime conferences in Casablanca, Tehran, and Yalta.

But not even the presidential seal of approval could save the classic Model K. Production figures for the line's three final years are in dispute.

Other authorities quote still different numbers, but it's a fact that a few leftover 1939s were sold as 1940 models.

It's remarkable the magnificent Ks lasted as long as they did. Duesenberg and Marmon were long gone by the time hallowed Pierce-Arrow closed its doors in 1938, and the Packard Twelve was history a year after that.

Cadillac had dropped its V-12s after 1937, and the Sixteen would follow after 1940 and a final 61 units. At least the big Lincolns didn't go to the grave alone.

An era had ended, and, as they say, we shall never see its like again. Classic-car authority Paul Woudenberg has said of the Model K Lincoln: "Perhaps no car in production at that time could match [it] for sheer quality without regard to cost." That's tribute enough to Edsel Ford's commitment to build the best.