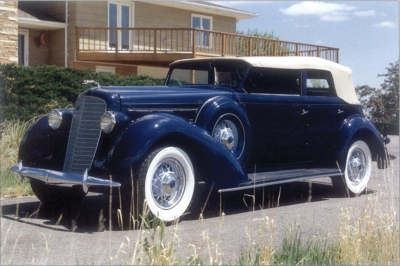 Styling on the 1936 and 1937 Lincoln Model K became even sleeker than before, with updates the first year and a complete redesign the next.

Offerings in 1936 numbered 19, including coachbuilt models. Technical changes were few and minor but significant.

A much-slowed steering ratio required 4 1/3 turns lock-to-lock instead of three, freewheeling was (blessedly) dropped, and there was a new transmission with a helical-cut gear for first as well as second and third.

Though still improving, the national economy in 1936 was by no means back to pre-Depression levels. Even so, automobile sales increased dramatically, especially among medium-priced marques such as Buick, Chrysler, and the Packard One-Twenty.

At Lincoln, Model K volume rose about seven percent to 1,515 (some sources say 1,523), still a disappointment. It's worth noting, however, that Packard sold a thousand fewer of its senior cars during 1936 versus the previous year.

This situation must have been terribly discouraging to Lincoln management, and perhaps especially to Edsel Ford. But, determined to give it one more try, Lincoln introduced a completely restyled Model K for 1937. Rounded, even bulky in appearance, it carried streamlining a step further with fender-mounted headlamps and, on most offerings, built-in trunks.

Metal-covered dual sidemounts were standard on only five models, mostly coachbuilt styles, though still optional for others. The factory touring body was finally dropped altogether.

Mechanically, it was time to play catchup, at least to a point. Hydraulic valve lifters, pioneered by Pierce-Arrow in 1933, were finally adopted, and a revised camshaft helped improve performance, though advertised horsepower remained at 150.

But mechanical brakes were still the order of the day for the big Lincolns, and would remain so even after other Ford Motor Company cars got them for 1939.

Find details on the end of the Model K's run, through 1940, in our final section.