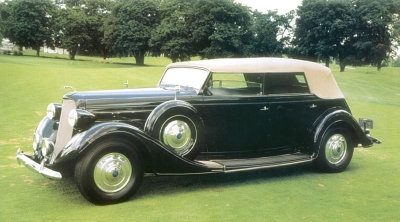 Lincoln was still losing money, and Edsel Ford and other company officials (no doubt with a nudge from the founder) evidently decided there was no profit to be had with big cars costing less than $4,000.

It seemed a surprising move, but only until November 1935, when Lincoln unveiled an even bolder response to the changing market. This, of course, was the radically styled Lincoln Zephyr, with pioneering unibody construction, V-12 power, and prices as low as $1,275.

Zephyr was to Lincoln what the LaSalle was to Cadillac: a more saleable medium-priced product to keep the company afloat until happy days, again, really were at hand.

Though the economy had not fully recovered in 1935, Franklin D. Roosevelt's New Deal had made things better, and the Zephyr sold like no Lincoln before: more than 14,000 in its first season alone, and that with just coupe and sedan body styles.

By contrast, the most affordable 1935 Model Ks cost $4,200, a jump of $900 from the comparable 1934 models -- which was a major jump. Lincoln again offered semi-customs, but fewer of them: by LeBaron (now part of Briggs) and Brunn on the 136-inch chassis; by Brunn, Judkins, and Willoughby on the 145. (Dietrich, now a part of Murray, was no longer building Lincoln bodies.)

The costliest of these was Willoughby's $6,800 sport sedan; only five were built. With this price range, the Model K was just too expensive to sell very well in 1935, and production fell 30 percent to 1,411, including 580 short-wheelbase cars and 820 long models, plus chassis and miscellaneous specials.

And more's the pity, for the 1935s were the most improved Lincolns since the original Model Ks. Styling underwent a major transformation, becoming softer and more rounded, yet more imposing.

Wheel size was reduced once more, to 17 inches. The radiator cap was newly hidden beneath the hood, though the Gorham greyhound remained in its customary place.

In addition, bodies were moved 11 inches forward on the chassis to position all passengers firmly between the axles for a more comfortable ride. The center of gravity was lowered as well. Softer front springs and new shock absorbers were adopted, as was a rear anti-sway torsion-bar stabilizer.

The 414-cubic-inch V-12, still at 150 horsepower, got needle-bearing tappet rollers for quieter operation and got an extra rubber mount for a total of five. Freewheeling became standard, and the transmission picked up better synchronizing for easier shifting.

Last but not least, the 1935s received a new dashboard with space for a newly optional radio.

Find out how the Model K continued to evolve on the next page.