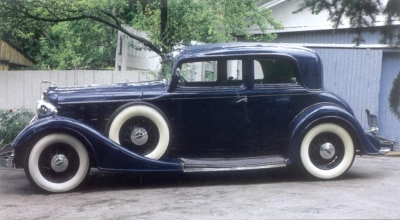 At 381.7 cubic inches, the new V-12 was marginally smaller than the eight it replaced but made the same 125 horsepower.

More importantly, it was lighter than the KB twelve, which enhanced handling, and was, if anything, even smoother. The new KA powerplant also marked a radical departure from Lincoln's traditional engineering, with four main bearings instead of seven and no costly fork-and-blade con-rod arrangement.

Instead, blocks were offset and rods placed side-by-side on the crankshaft journals. Also featured were replaceable insert bearings, an innovation at the time.

Lincoln established its own coachworks in 1933, making that year's "factory" bodies literally that. Styling was a cautious evolution of 1931-1932, with a few touches prompted by competitors and industry trends.

Among the most noticeable was adoption of skirted fenders as a running change in February, though these were available for earlier 1933s as a no-cost retrofit.

Also evident were larger freestanding headlamps (no more crossbar), a bolder grille with standard thermostatic shutters and slightly greater rearward rake, newly hidden horns, a stylish dip in the front bumpers, and a return to hoodside louvers. Wheelbases were unchanged.

Inside was a redesigned dashboard with a speedometer recalibrated to 110 mph, though that was wishful thinking.

All this applied to both 1933 series -- the KA and the KB -- as did a stronger new-design X-member chassis, a reworked transmission, new thermostatic shock absorbers that automatically adjusted for temperature, and brakes allowing the driver to select different pressure levels to suit road conditions.

Yet for all this, sales fell again. The market for cars of this character and price had all but disappeared by 1933. The patrician KB was especially hard hit, with only 533 built for the year.

A broad array of semi-custom models was still cataloged, but most again numbered in the mere handsful. KA production totaled 1,114, down nearly 37 percent from 1932.

The tighter compression mandated costlier high-octane Ethyl gasoline, but at a time when premium fuel rarely cost more than 22 cents per gallon, the extra expense was probably no handicap to Lincoln sales.

The new KA 414-cubic-inch V-12 was four inches shorter and an inch narrower than the KB's 448; it also boasted aluminum cylinder heads. Even so, some Lincoln purists took a dim view of it, among them Wilfred Leland, son and longtime associate of Lincoln founder Henry Leland.

Over time, however, the 414 proved even smoother and more flexible than the bigger V-12, as well as more fuel-efficient. It nearly matched the 448 in low-rpm torque, though it fell somewhat short at the top end.

Wheelbases remained the same, but the factory touring and phaeton styles became available only on special order, due to dwindling demand, and the KB series now listed far fewer semi-custom bodies.

The Depression had all but wiped out the market for expensive handcrafted cars. Locke, Waterhouse, Holbrook, and Murphy had already closed their doors, and other coachbuilders were soon forced to do the same.

Only Brunn, Dietrich, Judkins, Willoughby, and LeBaron remained as "authorized" Lincoln coachbuilders, and for 1934, they produced only 159 semi-custom KBs combined.

Production of factory-bodied models totaled 445, plus a few bare chassis. The KA fared much better at about 1,545 units, which boosted Lincoln's total volume by some 31 percent to 2,149.

To learn about changes for the 1935 model year, see the next section.