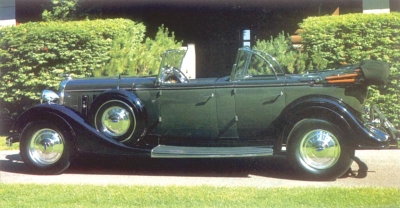 The rarest of all 1934 Lincolns is the KB sport phaeton -- just two of the dual-cowl cars were built.
©2007 Publications International, Ltd.

The 1932s were undoubtedly the most elegant Lincolns yet, a fact owed in no small degree to Edsel Ford and his Lincoln Model K design. Though nominally the president of Ford Motor Company, Edsel didn't run the place in most respects; his irascible father was still really in charge.

But there was an exception. According to industrial designer Walter Dorwin Teague, who worked with Edsel in creating several Ford exposition buildings during 1934-1940, "In the field of design [Edsel] had a free hand. Here his unique ability was, in his father's eyes, both mysterious and highly respected, not to be interfered with. . . .

"By choice he moved quietly, behind the scenes, where public eyes could not follow him. Thus, the fact that among his many superb qualities he was also a great designer was known to few except those who had the privilege of collaborating with him in this field."

Edsel Ford was a prominent patron of the arts, serving for many years as president of the Detroit Institute of Arts, where he commissioned and inspired masterful, if controversial, frescoes by Diego Rivera.

A man of impeccable taste, with a keen eye for line and form, he had set up a studio in the old Leland Lincoln plant as a sort of retreat where he could develop his design concepts, free of interference from old Henry. His goal was succinctly expressed when he remarked, "Father made the most popular car in the world. I would like to make the best."

He'd begun influencing Lincoln design soon after Ford bought out the founding Leland family in 1922. Each year he would solicit proposals from America's most prominent coachbuilders and decide which firms would supply which body types.

Thus, for 1932 as an example, Willoughby was assigned to do Lincoln's limousines, Brunn the cabriolets, Dietrich the coupes and convertible sedans, Judkins the berlines and formal coupes, and Murphy the phaetons and roadsters.

Among the rarest and most desirable of 1932 KBs are the convertible Victoria by Waterhouse (only 10 built) and a Murphy sport roadster (just three copies).

But despite coachbuilt cachet and a more impressive lineup, Lincoln sales sagged in 1932 as the Depression headed toward rock bottom. A major reason was that even those few people who could still afford expensive automobiles were often reluctant to be seen in one at a time when people were selling apples on street corners and lining up at soup kitchens.

For the calendar year, Lincoln managed 1,765 KAs and 1,641 KBs for total sales of 3,406, down about five percent from 1931. Still, this wasn't a bad showing in comparative terms, as both Cadillac and Packard dropped 39 percent from their dismal 1931 totals.

Lincoln godfather Henry Leland died on March 26, 1932, at age 89. By year's end, the remarkable V-8 he had designed more than a dozen years earlier would also pass into history.

Anticipating even more challenging competition, Edsel Ford had instructed chief engineer Frank Johnson in 1931 to develop a new 12-cylinder engine that would be less costly to build than the Leland-based engine but just as smooth, quiet, and powerful.

To learn about the models that got the new engine, check out the next page.