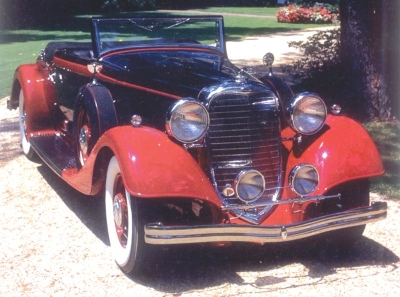 The big news for the 1932 Lincoln Model K line was the magnificent Model KB, still considered by some classic-car buffs to be the finest Lincoln of all time.

Replacing the K but built on a modified version of its chassis, the KB carried a new 65-degree V-12 with 150 horsepower (which was probably a conservative rating). At a whopping 447.9 cubic inches, this engine was very nearly a match for Cadillac's 452.6-cubic-inch V-16.

Road tests conducted at the famed Brooklands circuit by Britain's The Autocar showed a KB could do 95-100 mph despite curb weights of 5,200-6,000 pounds.

Fortunately, Lincolns of this period had brakes to match their speed. As on the Model L and 1931 K, these were cable-controlled Bendix Duo-Servo units with 340 square inches of lining area, 24 percent more than on the Cadillac Sixteen. Drums were ribbed for cooling and made of tough high-carbon steel.

Though technically new, the KB powerplant was derived from the K-series straight eight, and thus inherited its costly fork-and-blade connecting rods that had been a Lincoln hallmark from the start.

The rock-hard cylinder blocks were cast from a close-grained iron alloy comprising 15 percent steel, 1 percent nickel, and 0.5 percent chromium. A massive 93-pound crankshaft was cradled by seven huge bronze-backed babbitt main bearings. In short, this engine was built to last.

The other string to Lincoln's bow for 1932 was the Model KA, a V-8 series on the same 136-inch wheelbase as the last Model Ls. The engine here was essentially that of the 1931 K, except that horsepower was raised to 125.

This Judkins KB rumble seat coupe is an example of the V-12 KB model for 1932.
©2007 Publications International, Ltd.

The KA was offered in seven body types, all factory styles built by Murray. It has been reported that the Soviet government ordered 400 of these cars -- nearly 19 percent of 1932 series production -- for use by tourists and foreign dignitaries, although "Uncle Joe" Stalin himself was partial to Packards.

KAs were usually delivered with colored bodies and black fenders, while KBs were typically finished in two tones of a given color and reportedly required some 59 quarts of paint.

Another distinction was the cloisonne radiator badge: red on KAs, blue on KBs. Like 1930-1931 Lincolns, the KB offered both factory body styles as well as semi-customs supplied by some of America's leading coachbuilders -- 24 choices in all.

Enhancing appearance for both series were more rounded radiator shells, hoodside doors instead of louvers, fender-mounted parking lamps, and wheels again reduced in diameter, this time to 18 inches.

Find details on Lincoln Model K design on the next page.