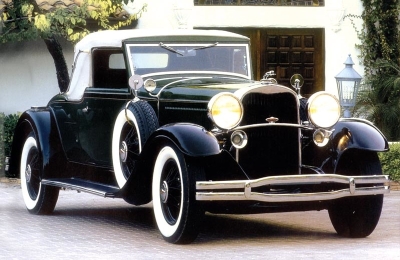 Walk through the City of San Francisco police garage and there, among the Harley-Davidsons, Ford Crown Vics, and the occasional battered Chevy Caprice, you would see what is believed to be the oldest active police car in the United States. It's a fully restored 1931 Lincoln Model K seven-passenger touring, an excellent example of the 1931-1940 Lincoln Model K series.

This 70-year-old beauty is a rolling history lesson, its back seat having played host down the years to presidents, war heroes, movie stars, politicians, and other notables.

Back in 1937, when it was still the police chief's official car, this Lincoln was reportedly the first automobile to cross the Golden Gate Bridge during opening ceremonies. Even today, it occasionally emerges from the garage to take part in parades and other civic functions.

The purchase of this Lincoln was something of a civic extravagance in Depression-era 1931, for its factory price of $4,400 would have bought 10 Ford phaetons.

For that matter, a Packard of comparable size and power would have cost the city about $800 less and carried arguably more prestige to boot. Then again, San Francisco, long known as "The City that Knows How," had a certain status of its own to maintain.

This historic Lincoln Model K was powered by a V-8 that was carried over from the last of the predecessor Model L Lincolns. (Nobody, it seems, has an authoritative answer as to why Lincoln went backwards in the alphabet.)

The L was the very first Lincoln, designed by the legendary "Master of Precision," Henry Martyn Leland, who founded Cadillac in late 1902, then built Liberty aircraft engines during World War I before establishing Lincoln.

The Model L, introduced in September 1920, carried a 60-degree flathead V-8 of 357.8 cubic inches and 81 horsepower. By 1928, this smooth, quiet engine had been bored out to 384.8 cubes and 90 horsepower but was otherwise basically unchanged. Fast and sturdy, the Prohibition-era Lincoln was a favorite on both sides of the law.

The Lincoln Model K appeared in 1931 with 120 horsepower on unchanged displacement. A higher compression ratio (5.2:1 vs. 4.8:1), together with a dual-downdraft carburetor -- an industry first -- accounted for most of the difference.

Developed in response to faltering Lincoln sales, the K was much more handsome than the rather stodgy L. A new 145-inch wheelbase, up nine inches from the L's span, contributed to a graceful look.

So did bodies mounted slightly lower on the chassis and wheel diameter reduced from 20 to 19 inches. Again riding atop the radiator cap was a sleek greyhound designed by the Gorham silversmiths, a Lincoln hallmark that would persist until World War II.

Other new technical features in the Lincoln Model K included a larger fuel tank; a mechanical fuel pump, replacing the troublesome vacuum tank; and worm-and-roller steering, an improvement over the previous worm-and-sector type.

Houdaille double-acting hydraulic shock absorbers were carried over from late Model Ls. Freewheeling, a popular -- though dangerous -- fad of the time, was supplied as standard equipment.

Times were tough in 1931, especially for luxury-class cars. Sales at both Cadillac and Packard were off by about one-third from the previous year.

Though this was far from sufficient volume to turn a profit (Lincoln lost some $4.6 million in 1931), the new line had clearly won the public's acceptance.

But the competition had been busy, too. Cadillac introduced its huge new Sixteen in January 1930, then followed up in October with a V-12 priced about $800 less than the eight-cylinder Model K.

Others soon got into the multi-cylinder race, Marmon with a superb V-16 during 1931, Packard and Pierce-Arrow with V-12s the following year. Even Franklin would offer a huge V-12 by 1933.

To learn how Lincoln responded to the competition, check out the next page.