by the Auto Editors of Consumer Guide
Next
The 1931-1936 SS I are the cars that marked the emergence of William Lyons' Swallow Sidecars coachbuilding company as an automaker in its own right, and historically significant as the direct ancestors of the first Jaguar. Originally offered as a closed coupe in two versions, the SS I 2054cc Sixteen and SS I 2552cc Twenty, both had side-valve engines and underslung chassis from Standard Motor Company.

SS I bodies were built by Swallow to Lyons' designs. Early models had cycle-type front fenders, later ones had the "clamshell" style, but all had long hoods. A touring convertible appeared in 1933, followed by a 2-door sedan in 1934-1935. The undistinguished chassis featured beam axles at each end and cable-operated mechanical brakes.

Synchromesh was added to the transmission in 1934.The 1931-1936 SS I was long, low, and unmistakable -- but not very fast as the top end was barely 80 mph. Some versions had cramped cabins and small windows. But the sexy looks, wood-and-leather interior luxury, and amazingly low prices was a winning formula. 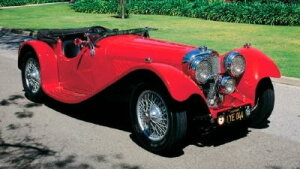