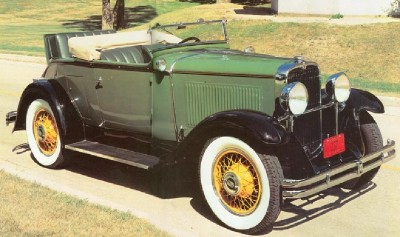 In 1980, this 1930 Nash Twin Ignition Six was one of two 1930 Nash roadsters still known to exist. But this rumble-seat beauty was lying in thousands of pieces on a dusty California garage floor. Dr. James Dunkel, a Rockford, Illinois dentist and life-long Nash enthusiast, examined the remains and decided to bring the machine back to life.

Authenticity was of the utmost importance in this project, the goal being to make the car look exactly like it did when it rolled off the Kenosha, Wisconsin assembly line. Dr. Dunkel studied old shop manuals and sales literature, scoured swap meets for parts, and consulted with experts around the country. It took three years to complete the restoration, but the results were quite spectacular. For example, the interior was not only upholstered in leather, but the hide sported the same grain originally used.

This restored 1930 Nash Twin Ignition Six was as authentic as possible.

The all-important mechanical side wasn't ignored either. After all, what good is a sporty convertible on a summer day if it doesn't run? The 275-cubic-inch, 85-horsepower six was advanced for its day, and the one in this car ran like new. Dr. Dunkel told Collectible Automobile in 1984 that he loved to get behind the wheel and wasn't afraid of keeping up with highway traffic. "It does its best at 45-50 mph, and it's so easy to drive you'd think it had power steering."

It took three years to restore this 1930 Nash Twin Ignition Six.
Even the interior of this Nash restoration was a model of authenticity.

Excellent styling, fine workmanship, and good performance are the factors that make the 1930 Nash a collectible automobile today. These are also the reasons Nash managed to show a profit in a depressed 1930 while other independent manufacturers were struggling to survive. It was a landmark year for Nash, and classic appearance made its cars real contenders in the competitive medium-price field.