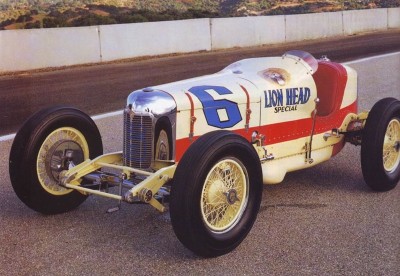 Most of the body of this restored 1930  Car is original. See more pictures of classic cars.

The 1930 Miller "91" Indy Car was designed by Harry A. Miller. During the Twenties and Thirties, Miller designed and built some of the finest racing engines in the world. Miller also produced chassis and drivetrains, and during the Thirties it wasn't unusual to see Miller-powered front-, rear-, and even four-wheel-drive racers dueling neck-and-neck around the Indy Brickyard.

Our featured car was built in 1930, at which time it was fitted with a Miller four-cylinder engine. Riding a Stevens rear-drive chassis, it competed in a record 12 Indy 500s, the last in 1947.

While it carried many sponsors and several different engines during that period, it has been mechanically restored to its original condition with a 183-cubic-inch, twin-cam, eight-valve engine. The Miller four powered the car to a qualifying speed of 109.810 mph in the 1930 season, good enough for a first-row spot on the starting grid. Cosmetically, however, the racer has been restored to the way it appeared at the 22nd running of the Indianapolis 500 in 1932. Coincidentally, in both races it finished second behind front-drive Miller-powered cars.

After its final tour of the brickyard, the car languished in an Indianapolis garage for 20 years, then was stored in upstate Pennsylvania for another 20 years. It was finally restored in 1987. Amazingly in its 12 years of competition, the car was never wrecked, so the aluminum body is all original except for the grille and hood.

The current owners, Richard and Royden Maloumian of Philadelphia, Pennsylvania, purchased the car in 1988, after which they attended to some minor mechanical details. Relatively few racing cars of the Thirties have been restored touch authentic original condition, and fewer still can boast of such a long and rich racing history.