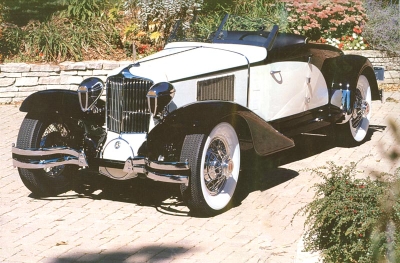 The 1930 Cord L-29 Brooks Stevens Speedster seen in this article was a custom job done by one of the greats of automobile design. The name Brooks Stevens is indelible in the annals of car design. Schooled in architecture in the Thirties, Stevens returned to his native Milwaukee, Wisconsin, to establish an industrial design firm.

Like many others in the then-budding field, his clients included automakers, and over the years his company was responsible for the styling of numerous vehicles, such as the Willys Jeepster, the Jeep Wagoneer, and the 1962-1964 GT Hawk update of Studebaker's legendary "Loewy coupe" design. Then, of course, there was the Excalibur, Stevens's mid-Sixties revival of Twenties classics themes.

Brooks Stevens's first car design wasn't for a client, however; it was for himself. The result was the Cord "speedster" seen on these pages. It was a particular favorite of the designer, who still had it at the time of his death in 1995.

According to Ed Schoenthaler, Stevens became enthralled with E. L. Cord's new front-wheel-drive automobile when, as a teenager, he attended a wedding at which the newlyweds were given an L-29 as a present. Stevens's father, a successful engineer, helped him buy a two-year-old cabriolet as a reward for hard work.

In the mid-Thirties, about the time his studies at Cornell University in New York were completed, Brooks Stevens got the urge to customize his Cord convertible. The goal was to turn it into a speedster along the lines of those being built on Auburn, Duesenberg, and other prestige-car chassis.

The custom speedster was a particular favorite of Brooks Stevens, who still had it at the time of his death in 1995.
©2007 Publications International, Ltd.

The cowl was lowered slightly and the body narrowed. The overall shape of the cabriolet deck was retained, but the rumble seat was removed and the deck smoothed over, then capped with a trailing fin. A raked, vee'd windshield replaced the upright one-piece unit used on standard L-29s. The front fenders were skirted and the usual sidemount spares discarded, their fender wells filled in. Standard hood louvers were replaced by Dusenberg-like mesh screens that aided engine cooling when Stevens entered the car in hill-climbs, Schoenthaler said. The exterior was capped by a Stevens-designed radiator cap, narrow Woodlite headlights, a rear bumper designed to protect the fin, and a sweeping two-tone paint scheme.

Inside, the engine-turned dash was copied from the much-admired "Duesey." The seatback was hinged so that when folded, there was access to the luggage compartment under the enclosed deck. Limousine Body, the Cord-owned coachbuilding shop, performed the modifications.

Stevens retained the stock 299-cubic-inch Lycoming straight-eight engine and three-speed transmission, the latter with its dash-mounted shift lever and distinctive "backward" shift pattern. However, he had a twin-carburetor intake manifold and a special exhaust manifold made, and racier final-drive gearing was installed. (A factory rebuilt engine was installed prior to the car's competition years.) In later years, Stevens took his cherished Cord to shows and vintage-car touring events.