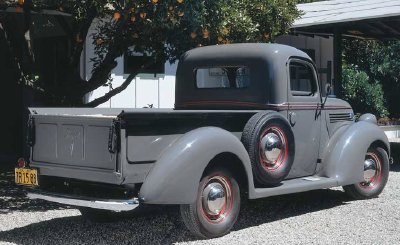 Ford pickup trucks were fitted with a new cab, front-end sheetmetal, and bed for 1938, while 11/2-ton versions got a new chassis.

A further attraction was the debut of a truck that slotted between the light-duty car-based pickup and the heavy-duty 11/2-ton models. Rated at one ton, the new series was appropriately called the "One-Tonner." It would be followed by a Three-Quarter Tonner the following year. Also introduced by Ford in 1938 were the industry's first Cab-Over-Engine (COE) models.

The 1938 Ford pickup truck also got a new cab and pickup bed.

An oval grille was the final new touch to the 1938 Ford pick truck models.

A wrecker sports the Cab-Over-Engine (COE) chassis and body Ford introduced for 1938. It provided for a shorter overall length with a given-size utility body -- which in this case was pretty short to begin with.

This 1938 fire truck was used by Ford at its Rouge Plant in Detroit.