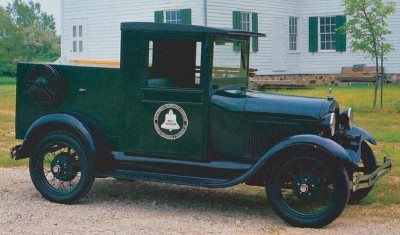 This 1928 Ford Model AA telephone truck has an enclosed cab -- a "luxury" because most pickups of the day were roadsters with a fold-down top. See more classic truck pictures.

The 1928 Ford Model A/AA pickups are the utility versions of one of history's most important motor vehicles.

On December 1, 1927, Henry Ford bought full-page ads in 2,000 newspapers to announce the 1928 Ford Model A automobile, the long-awaiting replacement for the Model T.

"We believe the new Ford car is as great an improvement in motor car building as the Model T was in 1908," he declared. "In appearance, in performance, in comfort, in safety, in all that goes to make a good car, it will bear out everything I have said here." He could also have been describing the 1928 Ford Model A/AA pickups.

People rushed to showrooms to see the Ford Model A, and soon it became quite fashionable to be seen in the new Ford. Governor Franklin D. Roosevelt of New York bought one for use around his Hyde Park estate, and every star from Lillian Gish to Will Rogers seemed to own an A.

While the Model A car was offered in an array of body styles, so was the 1928 Ford Model A/AA pickup. They included a sedan delivery (basically a Tudor sedan with rear windows filled in and cargo space behind the seats), a handsome roadster pickup, a canopy delivery with fixed top and roll-down side curtains (for the cargo but not the driver), a long-wheelbase panel, and 1 1/2-ton stake and platform trucks. The roadster pickup was the most common body, and the one most seen today.

Specifications for the 1928 Ford Model A/AA pickups mirrored those of the Model A car and were straightforward: four cylinders on a conventional ladder chassis with mechanical brakes. The L-head engine, rated 40 horsepower, displaced 200.5 cubic inches and was twice as powerful as the Model T's -- also lighter and more efficient. No longer was it bolted to the complex and outdated planetary transmission, but to a modern three-speed gearbox with a dry multiple-disc clutch.

Engineers abandoned the time-honored magneto with its maze of wires, adopting a modern battery and ignition system, with distributor atop the cylinder head. Also new: a centrifugal water pump and fin-and-tube radiator.

The 1928 Ford Model A/AA sedan delivery was basically a standard Tudor sedan with filled-in rear windows and no rear seat.