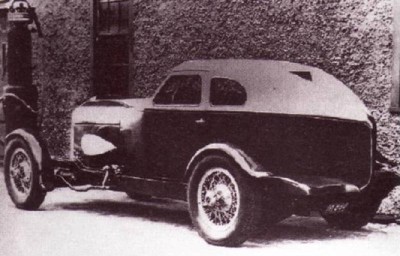 The 1928 Auburn Cabin Speedster was a very different sort of Speedster.

Another very different Auburn Speedster was constructed during the closing months of 1928. Known as the Cabin Speedster, it was an enclosed, two-passenger sport coupe based on a 1929 8-90 chassis, but powered by the 125-horsepower engine of the larger 8-120.

Possibly the prototype for Auburns yet to come, it seems more likely the Cabin Speedster was planned from the beginning as a one-off built for display at the 1929 National Automobile Show in New York; records aren't clear on that point. Neither is it clear who was responsible for the car's design. Auburn advertised the Cabin Speedster as having been styled by race driver Wade Morton, who was serving as the company's test driver at the time. (The design patents were even registered in Morton's name.)

But it is questionable whether Morton had the necessary background and training to have come up with such a complex design. We'll never know for sure, but given that Auburn president E. L. Cord was no stranger to exaggeration, it seems more plausible to conclude that the Cabin Speedster actually represented the work of Alan H. Leamy, who had recently come aboard as Auburn's chief stylist.

The lightweight aluminum body, built by the comparatively obscure Detroit coachbuilding firm of Griswold, has been called bizarre. Certainly it was different, featuring a radically canted windshield, wicker seats, a ducktail deck, and cycle fenders that turned with the wheels. Quarters were dreadfully cramped, even for two people, but who ever said that a speedster had to be practical?

Practical or not, the Cabin Speedster is said to have been the sensation of the New York show. Then, in February 1929, it was dispatched to Los Angeles, where it was displayed at the Pacific Southwest Automobile Show. The enclosed Speedster was one of more than 300 cars shown under electrically lighted tents. Tragically, a short circuit set off a conflagration in which all of the cars were destroyed, so the original Cabin Speedster had a very short life.

Meanwhile, back in Indiana, the Auburn factory was working at capacity and the company's files were bulging with unfilled orders. Furthermore, with the L-29 front-drive Cord about to be introduced, the men of Auburn had more than enough to do. No more Cabin Speedsters were built.

Fast-forward to 1983, when Dr. Peter C. Kesling, of LaPorte, Indiana, undertook to build a Cabin Speedster replica. In fact, in the end, Kesling built two, the second fitted with a T-top roof, perhaps in an effort to make the cramped cabin more habitable. The first of the replicas was displayed at the 1986 Pebble Beach Concours d'Elegance, where it attracted at least as much attention as any car in the show. In the end, it placed second, behind a 1930 Rolls-Royce Phantom I Brewster-type Ascot, in Class F for European and American classics with new coachwork.

The Cabin Speedster may not have been practical, and to some eyes it wasn't beautiful, either. But it surely was one of the most interesting Auburns ever built.