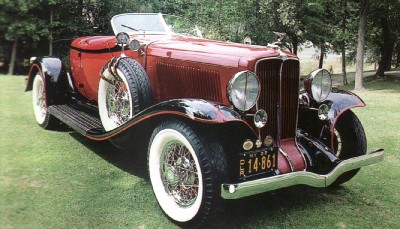 Styling for the Auburn Speedster was unchanged for 1932, but several mechanical innovations were adopted. Among these were the Startix automatic starter; and, on the Custom models, Delco ride regulators -- shock absorbers that could be adjusted from the driver's compartment for a firmer or softer ride.

Free-wheeling, previously optional at $85, became standard equipment on all models and Customs came with a vacuum-controlled two-speed axle known as Dual Ratio. It provided the driver with a choice of "performance" (4.54:1) or "economy" (3.00:1) gearing. Best of all, prices were cut. When a second price reduction was ordained during the model year, the basic Speedster went for just $845, a cool $100 less than its 1931 counterpart and only $80 more than a six-cylinder Pontiac convertible.

Second, cylinder banks were set at a 45- rather than a 90-degree angle. As a result, the width of the engine was reduced and Auburn claimed that the "out-of-step" firing interval induced by the 45-degree angle reduced the amplitude of any torsional vibration that might occur. Incidentally, the same angle was used by the contemporary Cadillac V-12, which tends to confirm stories that Auburn's V-12, like that of the Cad, must have been derived from what originally had been a 16-cylinder design.

The 12-160 bodies were the same as those of the 8-100, as the eight-cylinder series was now designated, though the chassis was lengthened by half a foot. And since the senior cars outweighed the juniors by some 660 pounds, as a safety measure they were fitted with hydraulic brakes. (The 8-100 retained the Steel-draulics.) Once again, prices were incredibly low, starting at $975 for a standard 12-160 coupe. Even the V-12 Speedster went for $1,145 as a standard, $1,275 as a Custom. It took $3,750 to drive home a 12-cylinder Packard convertible with the same horsepower rating.

In an effort to gain publicity for the new 12-160, a Speedster and a Brougham two-door sedan were sent to Muroc Dry Lake in California, where they racked up 37 new stock-car records for speed, some of which stood until after World War II. But the 12-160 was clearly the wrong car for those hard times. Auburn new-car registrations plummeted that year by more than 60 percent.

The 1933 Auburn Speedster was largely unchanged from the previous model year.

There wasn't much change for 1933, except that an upscale Salon trim line was added to both the eight- and 12-cylinder series (with Speedsters included in both new model lines). But if things looked bad at Auburn during 1932, they looked worse in 1933, with volume totaling less than half the dismal 1932 figure.

Obviously, something different was needed. Millions were spent in developing and tooling a totally new Auburn for 1934. Styling was once again by Al Leamy. A six-cylinder series, absent since 1930, was returned to the line, powered by a larger and more powerful engine than before, and priced as low as $695. But the Speedster was gone once again, and the V-12s, which retained the 1932-1933 styling, were kept in the line just long enough to use up leftover components.