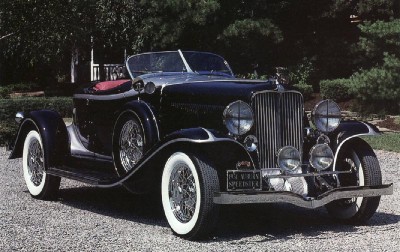 Heading into 1931, Auburn Speedsters had never been volume sellers. But perhaps somebody at company headquarters -- maybe even E. L. Cord himself, for he was always something of a showman -- woke up to the fact that they had been great image builders for a company that was seeking to build its reputation, at least in part, on the superior performance of its cars. In any case, the Speedster reappeared for 1931 in a brand new guise.

In fact, the entire 1931 Auburn line was heavily revised. Both the six-cylinder line and the larger eight were gone. The former 8-95, bored now to 268.6 cubic inches, re-emerged as the 8-98. Rated at 98 horsepower, it became the marque's sole offering, although it was available in either standard or Custom trim, the latter incorporating "free-wheeling," a popular, though dangerous, fad of that era. (The Custom was listed as the 8-98A.) A heavy, X-braced frame was used, a first for a rear-drive automobile. (The design had first surfaced on the L-29 Cord.)

The interior for the 1931 Speedster was splashier, like the rest of its styling.

There was fresh styling from Leamy a design so attractive that probably only the Cords and Chryslers of the day could rival it for sheer good looks. With the help of 17-inch wheels, rather unusual at the time, the new Auburn stood some three inches lower than most of its contemporaries. Fenders were long and sweeping. The hood was high and impressively long, and narrow windows accented the low profile. The radiator grille, featuring dummy shutters on standards and working units on Customs, added a handsome touch. And the Speedster, as Richard Burns Carson has noted, "received a tail profile treatment reminiscent of the fan-tail sterns of early ocean liners."

To be sure, certain adjustments had to be made in order to make possible these price reductions. Fit and finish were not quite up to previous Auburn standards, and some critics have said the cars' structure wasn't quite as solid. Perhaps the most significant difference had to do with the adoption of Midland "Steel-draulic" mechanical brakes in place of the Lockheed hydraulics of 1928-1930.

The Great Depression was sinking rapidly toward its nadir during 1931. It was a terrible time for the automobile industry, with sales totaling less than half the record figure posted just two years earlier. There were, however, a couple of exceptions. Plymouth, to the surprise of everyone except perhaps Walter P. Chrysler, zoomed smartly from eighth place to third on a 57-percent production increase for the calendar year. But the really sensational sales gain, at least on a percentage basis, was that of the Auburn. The numbers forged ahead by an astounding 130 percent, as Auburn jumped suddenly from 23rd to 13th rank among American automakers, handily surpassing its own previous production record, set in 1929.

Cord's sales strategy had been an unusual one. He deliberately sent to his dealers fewer cars than they ordered, claiming that for every available Auburn, two buyers were waiting. The idea was that in this circumstance, it was never necessary for the dealer to make an over-allowance on the customer's trade-in, a common practice then as now. And this, in turn, enabled Cord to hold the dealer's profit margin to a very slim figure.