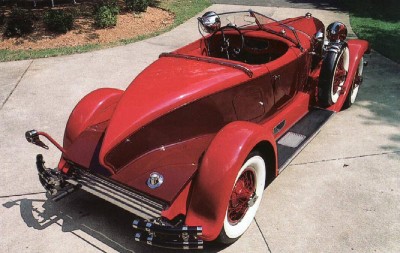 The 1928 Auburn Speedster took over plans that were already in place for a "second series" Auburn line planned for January of that year, a replacement for the warmed-over 1927 cars that constituted the "first series." In addition to a six-cylinder line there were two Lycoming-powered eights in this new roster: the Model 88, rated at 88 horsepower (as the reader might surmise); and the Model 115, also with horsepower to match its title.

To put these numbers in perspective, recall that this was at a time when the most powerful Buick was rated at 77 horsepower, and even the Cadillac could muster no more than 90. And by way of providing stopping power to match their speed, the new models would feature hydraulic brakes, something neither Buick nor Cadillac would adopt for another eight years.

These advances added up to a perfect basis for a Speedster. Or even two of them, one on the 8-88 chassis, the other on the 8-115. Although at least one source credits Count Alexis de Sakhnoffsky with styling the new Speedsters, the work appears to have been that of Al Leamy, then a new member of the Auburn staff and the man who would later be credited with the design of the gorgeous L-29 Cord automobile. Under his skilled hand, and in addition to Auburn's distinctive hood molding, the Speedsters were given a daringly raked, vee'd windscreen.

Door cuts and hood louvers were set at almost as steep an angle, all of which conveyed the unmistakable impression of speed, even when the car was at a standstill. A golf-bag compartment accessible through a bodyside hatch (a popular item at the time), twin side-mounted spares, and a smartly tailored "boattail" rear deck completed the Speedster's dashing appearance. Luggage space was severely limited -- and well nigh inaccessible in any case. Nobody could have called the Speedster practical, but neither could anyone deny its head-turning beauty.

Displacements of the two Lycoming-built eights remained the same, but horsepower climbed to 96 on the 247-cube version and to 125 on the 299-inch job.

We caution the reader that the term "Speedster," while appropriate enough, was not meant to suggest that these two very special Auburns were "sports cars." Chassis and engines were identical to those of the Auburn sedans. Steering was relatively slow, and the standard three-speed, wide-ratio gearbox was used. And with wheelbases of 125 and 130 inches for the 8-88 and 8-115, respectively, maneuverability was limited.

Nevertheless, during March 1928, Morton covered the measured mile at Daytona Beach, Florida, in a record-breaking 108.46 mph while at the wheel of a 115 Speedster. Later that year, Morton broke another record, this one at Atlantic City, New Jersey, by covering 2,033 miles in 24 hours, an average of 84.7 mph. This was high performance indeed, at a time when the maximum speed limit in most states was no more than 45 mph!

Few changes were made in the 1929 Speedsters, now designated models 8-90 and 8-120, though horsepower was increased to 96 and 125, respectively. The increases were attributable primarily to changes in the fuel system.

Nor were major differences made for 1930, although the horsepower rating of the smaller eight was advanced to an even 100. The 1929 Auburns, having sold in record numbers, left little reason to spend a lot of money on retooling. Besides, the company's attention (not to mention its resources) must surely have been focused by that time on the forthcoming front-drive Cord. But there was one notable omission from the 1930 Auburn roster: The Speedsters had been deleted.

Continue to the next page to learn what came next for the 1931 Auburn Speedster line.