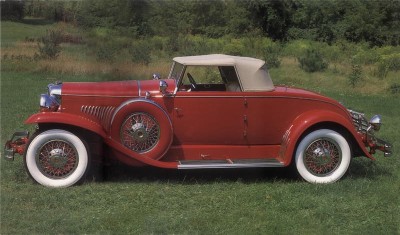 The Duesenberg Model J stood out above all other cars when it was introduced at the New York Salon on December 1, 1928. One of the earlier cars off the line was a convertible coupe bodied by Murphy. See more classic car pictures.
©Milton Gene Kieft

At the opening of the New York Salon, on December 1, 1928, one car stood out above all the others that were on display. It was the new Duesenberg. Keep reading to learn more about 1928-1934 Duesenberg J-Series.

The Duesenberg J-101 was the very first of the J-Series cars and the only example that had been completed by December of 1928. And what a gorgeous machine to behold! Finished in silver and black, it was a dual-cowl phaeton, bearing coachwork by LeBaron, The price wasn't specified, except to say that the bare chassis sold for $8,500. Figure at least $2,500 for a coachbuilt body and a buyer would have been looking at a price tag equivalent to 22 Model A Fords.

Left to his own devices, Fred Duesenberg would never have produced anything so pretentious. But financial problems had overtaken the Duesenberg Motor Company of Indianapolis, and control of the firm had been acquired in 1926 by Errett Lobban Cord, president of the Auburn Automobile Company. Cord wisely left Fred Duesenberg and his brother, August, in charge -- but he made it clear that he wanted the Duesenbergs to develop the "World's Greatest Motor Car."

Fred Duesenberg had been building automobiles of his own design as early as 1906, though in those days the name of his backer, Edward R. Mason, appeared on the radiator badge. He had gone on to build marine engines, and marvelously successful racing machines powered by a four-cylinder "walking beam" engine of his own design. Then, during World War I, Duesenberg turned to the production of aircraft engines and powerplants for artillery tractor units.

And finally, in 1921, the first Duesenberg passenger car appeared, the Model A. A highly advanced machine, it was powered by America's first series-produced straight eight, a 259.6-cubic-inch job featuring an overhead camshaft and rated at 88 horsepower. This at a time when Cadillac advertised its fine V-8 at 60 bhp. Speeds as high as 85 miles an hour were possible for anyone foolhardy enough to drive at such a pace on the comparatively primitive roads of the day. And to assure the driver that the Duesenberg would stop as well as it would go, four-wheel hydraulic brakes were fitted-another industry "first."

But at $6,500, that original Duesenberg was an expensive automobile, more than twice as costly as a Cadillac. Demand was never high, and by 1926 production was down to one or two cars a week. It was at that point that E.L. Cord entered the picture, and work commenced on the development of the mighty Model J.

Keep reading to learn about the mechanics behind the Duesenberg J.

The Mechanics Behind the Duesenberg J

The Duesenberg J was an enormous automobile. Two wheelbase lengths were offered: 142.5 and 153.5 inches. And the cars were heavy -- the lightest of them, the open styles on the shorter wheelbase, weighed close to 5,500 pounds. But under the hood was a fabulous 419.7-cubic-inch, dual-overhead-camshaft straight eight. Fitted with four valves per cylinder, it produced a mind-boggling 265 horsepower and 374 pounds/feet torque.

By comparison, America's second most powerful production car in 1929 was the Pierce-Arrow, rated at 125 bhp. Duesenberg advertised that "with a standard touring body and with top and windshield up and fenders on, this car has attained 116 m.p.h., while a maximum speed of 89 m.p.h. has been reached in second gear."

The big engine, designed by Fred Duesenberg and manufactured by Lycoming (a Cord-owned company), was as smooth as it was powerful. The drop-forged crankshaft, cradled in five oversized main bearings, was made of double-heat-treated chrome nickel steel. It was counterweighted, and statically and dynamically balanced. And then, just to be doubly cautious, there was a vibration damper consisting of two cartridges, each containing 16 ounces of mercury. Any vibrations that might be set up in the shaft were damped out almost instantly by the movement of the mercury in the cartridges.

Nobody talked about gas mileage. Those who had to ask obviously couldn't afford a Duesenberg anyway. Fuel was fed to the big 1-1/2-inch Schebler carburetor by no fewer than four fuel pumps, one of them mechanical, the others electric. Full pressure lubrication was accomplished by means of a gear-driven oil pump with a capacity of 22 gallons per minute. Meanwhile, an eight-gallon cooling system made sure there were no problems with overheating.

A hypoid axle, highly unusual in those days, helped make possible the new Duesenberg's low profile. Ross cam-and-lever steering was used, and under-girding the chassis was a frame stout enough to support a freight car. As for the brakes, they were probably the best in the industry -- hydraulics, of course, with huge 15 x 3-inch drums.

Shortly after introduction time an adjustable vacuum booster, controlled from the dash, was supplied, making it possible for the driver to match the big Duesenberg's braking action to the conditions of the moment-anywhere from gentle, for icy pavement, to very abrupt.

Learn about the production of the Duesenberg on the next page. 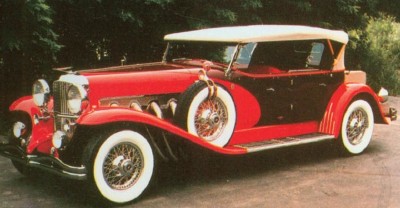 Bodies for the Duesenberg J were supplied by some of the nation's leading coachbuilders: Murphy, Holbrook, Derham, LeBaron, Willoughby, and Weymann, to name but a few. Then as the Duesenberg's fame spread, coachwork came from overseas. Fernandez et Darrin, Franay, Gurney Nutting, Saoutchik, and other top-ranking firms were represented.

And then there were the LaGrande bodies, most of them phaetons and all of them gorgeous. The late Gordon Buehrig, Duesenberg's chief stylist from 1929 to 1933, explained: "The LaGrande Phaeton was a product of the Depression, and it exemplifies the struggle [Duesenberg vice-president] Harold Ames made to keep the Duesenberg company in business.

"The Union City Body Company of Union City, Indiana, who built the body shells for the LaGrande phaeton, was not a prestige carriage builder. They had built some bodies for Auburn, but they also built seats for movie theatres and other non-automotive products. However, they could build bodies and they had a low wage scale. Ames was able to buy phaeton bodies from them for less than he could from LeBaron or Derham.

"At the Duesenberg factory we had good trimmers and painters, equal in fact to those in the prestige custom shops. Thus, the LaGrande bodies were purchased 'in the white,' then decked trimmed and painted at Duesenberg. This arrangement had the extra advantage of keeping our own craftsmen busy.

"LaGrande, incidentally, was a name coined by Harold Ames to be a prestige body nameplate because Union City ... was not a recognized carriage builder. The LaGrande name was also used later for all bodies received at the factory 'in the white,' which included unfinished bodies from Weymann, Walker, Brunn and others. While a LaGrande body plate was struck, it was not normally used, and these vehicles were usually delivered with no body plate affixed as they were referred to as Duesenberg's own coachbuilder. They are credited with producing twenty-one bodies, of which nineteen were LaGrande phaetons."

In fact, the LaGrande phaeton was basically Gordon Buehrig's adaptation of the LeBaron design that had appeared on Duesenberg J-101, though Buehrig incorporated some of the features of the later Derham Tourster, a body he had personally designed. The LaGrand version was suitable for use on either the 142.5-or 153.5-inch chassis, though most of them appeared on the shorter wheelbase.

On the next page, find out how Duesenberg faired during the Depression.

By 1931, with the nation locked in the grip of the worst Depression in history, the market for automobiles of the Duesenberg's calibre -- and price -- had just about dried up. Even those few people who could still afford such an automobile were, more often than not, reluctant to flaunt their prosperity in the face of such widespread poverty.

Still, there was a small but loyal clientele, many of whose members came from the celebrity world. Over the years Gary Cooper owned two of them. So did Mae "Come Up and See Me Sometime" West, while chewing gum magnate Philip Wrigley owned five! Harlem evangelist Father Divine had a huge Duesenberg "Throne Car," built on a special wheel-base of 178 inches. Cardinal Mundelein, who must somehow have overlooked his vow of poverty, owned a Duesenberg. So did Howard Hughes, New York Mayor Jimmy Walker, playboy Tommy Manville, pharmaceutical magnate Eli Lilly, publisher William Randolph Hearst, and Hearst's great-and-good-friend Marion Davies.

Duesenberg's response to its shrinking market was twofold. First, the price of the chassis was raised from $8,500 to $9,500, presumably on the premise that the extra $1,000 wouldn't mean a great deal to anyone who could afford such an expensive piece of equipage in the first place. And second, a supercharged version was under development.

Introduced in May 1932, the supercharged SJ series developed a neck-snapping 320 horsepower. Priced at $11,750 in bare chassis form, it was fitted with flashy, chrome-plated external exhaust pipes (which were soon adopted by owners of non-blown Duesys, of course). The factory claimed that an SJ phaeton with the top down would do 104 miles an hour in second gear, 129 in top.

Tragically, however, just a month after the SJ's debut, Fred Duesenberg died of pneumonia, resulting from injuries sustained in an automobile accident in which he was driving an SJ. His brother, Augie, took over Fred's duties as chief engineer. Soon afterward, Gordon Buehrig left to join Harley Earl's staff at General Motors, though he would return later to design the fabulous Auburn speedster of 1935-1936 and the Series 810/812 Cords of 1936-1937.

But by that time E.L. Cord's automotive empire was crumbling. Auburn packed it in following the 1936 season, and a year later both Cord and Duesenberg were gone. Well, almost gone -- between 1938 and 1940 one final Duesenberg was assembled from leftover parts.

A number of years ago, the late Ken Purdy wrote: "The fact that a whole new generation still recognizes his cars as 'the finest thing on four wheels' would please [Fred Duesenberg], which is perhaps the best monument that he could have."

As can be seen by comparing the Model J and the Duesenberg II, Elite Heritage Motors took pains to be sure that the Royalton was a faithful reproduction of the original.
©Milton Gene Kieft