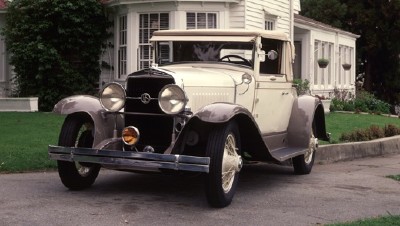 The 1927 LaSalle deserves its place in automotive history because it was the first production car worldwide to have been consciously styled. The convertible coupe body style, another LaSalle first (with seven other automakers!), sold for $2,635.
©Bud Juneau

This is the story of how the 1927 LaSalle came to me. For years, Cadillac had been America's best-selling luxury car. But by the mid 1920's Packard began playing catch-up, and by 1925 -- largely on the strength of its price-leading six-cylinder line -- Packard was commencing to eat Cadillac alive.

It happened that in May of that year, Lawrence P. "Larry" Fisher -- third of the seven brothers of Fisher Body fame -- was appointed Cadillac's general manager. And Fisher, determined that under his leadership Cadillac would again be number one, found several major tasks awaiting him.

For one thing, the Cadillac's styling was stodgy. In fact, it always had been. Henry Martyn Leland, the division's first general manager, had known nothing about the subject and cared even less. His concerns were for precision workmanship and unimpeachable quality. Cadillac's reputation was built on these qualities, and it was a heritage that Larry Fisher was careful to preserve.

But as far as looks were concerned, the Cadillac was tall, square, old-fashioned, and ungainly -- which, of course, didn't suit Larry Fisher at all.

And that was only for openers. An even more serious problem had to do with the competition.

In September 1920, Packard had augmented its huge Twin Six series with a smaller, lighter car known as the Single Six. Intended for the owner-driver rather than for chauffeur use, it offered traditional Packard quality in a more manageable package, and it quickly developed a loyal following, especially among women drivers.

It was comparatively costly at first, but by April 1922 prices had been reduced to the point that this new Packard could be purchased for as little as $2,485. Cadillac prices, meanwhile, began at $3,100.

By 1925, prices of both cars had risen a little, but the spread between the cost of a Packard Six and that of the Cadillac remained the same: $2,585 versus $3,185, a $600 difference -- which is to say that for the price of the Cadillac, the buyer could have both a Packard and a Chevrolet, with $75 left over. Or, to put the matter another way, the Cadillac sedan cost just over twice as much as a Buick Master Six in the same body style. For the upwardly mobile Buick owner, that was simply too great a jump. Thus, as customers circumstances improved, some of them left the General Motors "family" and defected to Packard.

The solution was obvious to both Larry Fisher and General Motors President Alfred P. Sloan, Jr.: GM would have to develop an automobile to fill that gap. Of necessity, the newcomer would have to be a high-quality car, more prestigious than the Buick, but its price would have to be pegged considerably under Cadillac's cheapest offerings.

Since the new car was intended to compete against the Packard Six, logic dictated that of GM's five automaking divisions, Cadillac should be the one to produce it. Thus, since it was to be a "companion" car to the Cadillac, it was logical that Cadillac's usual engineering practices should be followed in its construction -- including the landmark L-head V-8 that Cadillac had pioneered back in 1915.

This association also suggested that the name of the new car should in some way reflect its relationship to Cadillac. And since the senior car had taken its title from Antoine de la Mothe Cadillac, the 17th century French explorer who founded the city of Detroit, it seemed appropriate that the new car should honor another French pioneer: René Robert Cavalier de la Salle, who in 1682 had claimed Louisiana for King Louis XIV.

On the next page, learn about the 1927 LaSalle's engine.