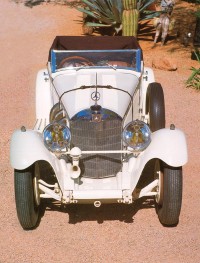 The great supercharged 1927-1932 Mercedes S/SS/SSK/SSKL were among the fastest cars, and some of the most beautiful, ever to put rubber to road. Ever. They were triumphant on road and track, magnificent to look upon, and faster than any contemporary automobile that might qualify even part-time as a street sports car.

Yet the young Ferdinand Porsche, only 48 when he became technical manager of Daimler-Benz, had arrived to engineer them almost by accident, succeeding Paul Daimler, son of the firm's co-namesake. Yet all the work was not done by Porsche. Hans Nibel-who replaced Porsche and had been a D-B employee since 1904-also deserves credit for the series.

Daimler had won acclaim for his 1908 Grand Prix Mercedes racer and 1914 4.5 liter, but his greatest accomplishment was the supercharged Mercedes engine. His first blown unit was a Daimler aircraft engine, built from 1915-18, with a Roots-type blower driven by a gear on the flywheel. Its technology led to the first supercharged auto engine in 1919, which three years later had evolved into a production four-cylinder unit of 2.6 liters, the 10/40/65 (10 taxable bhp, 40 bhp unblown, 65 bhp blown).

Similar was the 28/95 supercharged six with 120 bhp, never installed in a production model, but important in helping Mercedes return to international racing at the 1921 Targa Florio. Subsequent racers were unsuccessful, however, and Daimler resigned at the end of 1922. Porsche was then charged with developing the masterful supercharged engines Daimler left behind into race winners and extremely capable street sports cars.

Fast touring cars had always been Mercedes' stock in trade, but after the last 28/95s were built in 1924 the lineup had lacked a worthy replacement. Porsche's first steps were to shorten the chassis of the Model 24/100/140 (a 6.3-liter monster weighing 3,400 pounds) and to boost its under whelming performance.

The result was the Model K (for kurz or "short"), introduced in 1926 as a Mercedes (not a Mercedes-Benz), weighing only 3,153 pounds. Its two spark plugs per cylinder (one fired by coil and breaker ignition, the other by magneto) and a 5.0:1 compression ratio gave 110 bhp without a blower or 160 bhp with blower engaged: officially 24/110/160. The gearbox was unaltered, but final drive ratios were lowered numerically to reduce engine revs in relation to road speed, which was a little over 90 mph.

The K was an admirable touring car, but being tall and ungainly, it was certainly no sports car. Its successor was.

Keep reading to learn more about the K's successor.