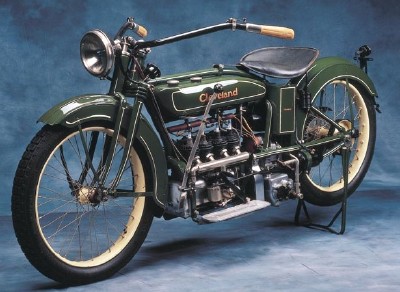 At 600 cc, Cleveland's four-cylinder engine was rather small, and performance wasn't up to the market's demands. See more motorcycle pictures.

The 1926 Cleveland motorcycle was the company's answer to buyers yearning for four-strokes. The result was a four-cylinder model that was not the most impressive performer.

Cleveland bought into the motorcycle business in 1902 by slapping its name on a generic machine built by American Cycle Manufacturing Company. It was not alone. Columbia, Tribune, Rambler, and a host of others got started the same way -- with essentially the same motorcycle.

Aside from mounting the motor in a separate cradle between the diamond frame and rear wheel, these bikes were all very similar to Indians of the period.

Later Clevelands were more distinctive. Frames were long, low, and oddly configured, since they held a small two-stroke single that was mounted transversely with its crankshaft parallel to the bike's centerline.

The two-speed transmission turned the power 90 degrees to culminate in chain drive to the rear wheel. Simple, light, and inexpensive, this model met with a fair degree of commercial success. But the market yearned for four-strokes, and Cleveland obliged.

After a brief run of four-stroke singles, Cleveland pulled out all the stops and introduced a four-cylinder model in 1926. Its 600-cc T-head engine (flathead with intake valve on one side of the cylinder, exhaust on the other) was much smaller than most fours, and even many V-twins.

Like the singles that preceded it, the crankshaft ran along the bike's centerline, but the transmission (now a three-speed) turned the power to allow for a chain-driven rear wheel -- same as Ace, Henderson, and Indian fours, though some others used a shaft.

Because of its small displacement, Cleveland's four was not an impressive performer, so it was quickly followed by a conventional flathead version that grew to 750 ccs and then 1000 ccs.

Though the last, introduced in 1927, was the first production motorcycle with a front brake, its high price proved an insurmountable detriment when the Great Depression hit, and production ceased shortly thereafter.

Go to the next page for more pictures of the 1926 Cleveland motorcycle. 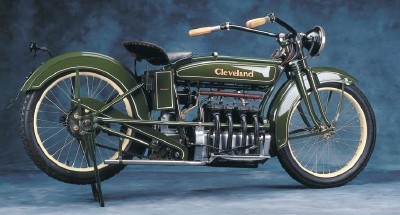 Cleveland pulled out all the stops with its first four-cylinder model, the 1926 Cleveland motorcycle. It offered a 600-cc T-head engine and a three-speed transmission.

The generator was belt-driven off the magneto.
A clutch pedal actuated the automotive-style clutch.