When the Bugatti Type 41 was finally finished it was nearly beyond comprehension, so grand was its scale. The engine, for example, was a monobloc straight eight of by-then established Bugatti design, with a single overhead camshaft and three valves per cylinder (two intakes, one exhaust) -- only it derived from Ettore's wartime Type 34 aero powerplant and was thus some five feet long and 770 pounds heavy.

Pistons the size of coffee cans and a two-piece crankshaft, itself weighing 220 pounds, gave an astounding 12.8-liters displacement -- and that was destroked from the planned 14.7-liter unit of the Royale prototype. Valve jobs meant removing crank, rods, and pistons, but Ettore didn't care. If you could afford a Bugatti, you could afford to hire out the dirty work.

The chassis was also typical Bugatti -- and gigantic: a channeled pressed-steel affair varying in cross-section from one inch at the ends to 10 inches at the passenger compartment. Front suspension was by semi-elliptic leaf springs poking through square holes in a hollow, tubular steel axle that provided "independence" by being in two pieces, joined in the middle, each free to move a little. At the rear were four upside-down quarter-elliptics, one pair ahead of the axle, the other behind, with trailing rods for added longitudinal location.

The transmission, a three-speed "crash-box" in unit with the differential, took power from a combined flywheel/multi-plate clutch mounted beneath the front seat to run in its own oil bath (actually a fine mist). And that power traveled a ways, for the wheelbase measured 169 inches -- more than the overall length of today's Alfa Romeo Spider. Brakes were massive, beautifully cast 18-inch aluminum drums integral with 24 x 7-inch alloy wheels, each secured by 32 stud-bolts.

A car so exclusive that even brochures were deemed unnecessary, the Type 41 was sold only as a bare chassis at a price commensurate with its towering size and presence: $25,000, more than twice the cost of the best, fully bodied Rolls-Royce. Buyers, of course, were presumed financially able to furnish their own bodywork, which brought the final price to around $40,000 -- say around a half million dollars in today's money.

That implied a super-select clientele, but Ettore did the selecting, and you needed more than mere money to buy. Achievement and social standing counted greatly with him. It also helped to be royal, though even that didn't guarantee acceptance. King Zog of Albania was refused a car because of table manners Le Patron judged as "beyond belief."

The car was announced with word that Spain's King Alphonso XIII would be the first owner-hence La Royale, some say -- but he was deposed before he could take delivery. Ironically, the "Car of Kings" was never sold to a monarch, reigning or otherwise.

The first production chassis wasn't delivered until some four years after announcement, by which time the Depression had forced cutting the planned 25 units to only six, including the prototype chassis. The latter, Number 41100, began with modified touring bodywork from a contemporary Packard Eight, then went through three more bodies (including a lovely prize-winning Weymann coach) before Ettore wrecked it. 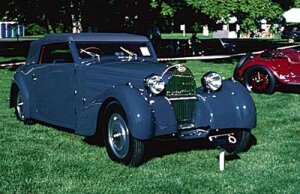