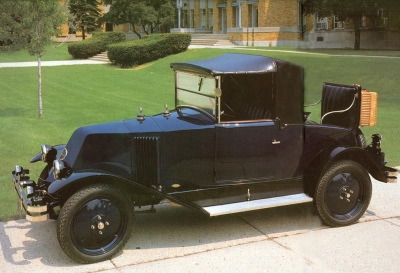 To prove its mettle, a 6 CV ran continuously for 203 hours at the Miramas track in 1926, covering 10,000 miles and averaging 49 mph. One year later, the 6 CV became the first car to make a solo trip across the Sahara Desert.

The Renault 6 CV NN rode a 96-inch wheelbase, about the same as a 1990 Ford Escort. It was 52 inches wide, 56 inches high, and 151 inches long. Semi-elliptic leaf springs held up the front, a transverse leaf the rear. It also boasted four-wheel brakes, which had been adopted in 1924.

This car's restoration was completed in 1988.
©2007 Publications International, Ltd.

Renault had long favored a "shovel-nosed" hood, which placed the radiator behind the engine, with the gas tank behind that (note the two caps on the hood). The 6 CV's engine, by the way, was the first with a removable cylinder head. It also used only two sleeve-type main bearings and had a novel three-position dipstick -- "run," "check," or "drain."

The Renault 6 CV NN used a German Bosch magneto ignition. The 12-volt electrical system, with starter/generator by Rhone of Paris, was direct drive off the front of the crankshaft. If the car needed to be hand-cranked, the crank fit into the front of the generator/starter unit.

This 1925 Renault NN, owned by Joseph "Bud" Schoenbeck, of Skokie, Illinois, first came to the U.S. in 1928 as a gift to the son of a Chicago country club executive. But the son wanted a Ford, so the Renault sat in storage for the better part of 20 years before it changed hands. Bud bought the car in 1958, at which point the Renault 6 CV NN was canary yellow with black fenders and red wheels and wore "Pete's Yacht Club" signs on the doors.

Although the wood in the body was good and there was little rust, the car needed a full restoration, which was completed in 1988. After writing 55 unsuccessful letters to locate tires to fit, Bud took 1931 Ford wheels, cut the spokes out, welded the rims to the original Michelin wheel centers, and fitted 4.00 × 19 motorcycle tires. When headlight lenses couldn't be found, an optometrist ground the scratches out of the originals.

The dashboard had been torn up to fit an old Buick speedometer, so it needed redoing. And when Bud located what was probably the very last gas gauge face from the original manufacturer in Paris, the only payment acceptable was a Zippo lighter. In rebuilding the engine, Model A Ford exhaust valves were turned down to size and Perfect Circle specially made the rings (five per piston).

It took 30 years -- "The longest restoration on record," Bud says -- but the end result is one very rare and virtually perfect Renault.