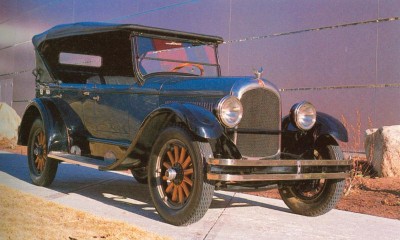 The 1924 Chrysler rode a 112 3/4-inch wheelbase, a bit on the short side for its price class. The five-passenger phaeton seen here listed at $1,395. See more classic car pictures.
©Nicky Wright

The story of the 1924 Chrysler B-70 begins with one man who started out as a railroad man. And Walter P. Chrysler might have remained in that line of work had he not visited the 1908 Chicago Automobile Show.

On display there was a huge Locomobile touring car, finished in ivory white with red leather cushions. Chrysler was smitten on the spot. But the Locomobile was one of the most expensive automobiles on the market: $5,000, more than enough in those days to buy a comfortable four-bedroom home. And Walter, with a wife and two little girls to support, had $700 to his name. He was employed at the time as Superintendent of Motive Power for the Chicago Great Western Railroad, at a salary of $350 a month.

Nevertheless, to Chrysler it wasn't a question of whether, but rather of how, he was going to buy that car. In the end, he managed to persuade one of the railroad executives to co-sign his note, and the Locomobile was duly shipped to the Chrysler home in Oelwein, Iowa.

It should be noted that, so far as is known, Walter Chrysler had never driven an automobile. Presumably he didn't know how. One might expect, then, that his first order of business would have been to learn how to operate this big machine in which he had invested so much. But he didn't. Rather, he had the car delivered to the barn behind his house, and immediately set about disassembling it. For three long months he repeatedly took it apart and put it back together, studying every part of that Locomobile until he was sure he understood thoroughly how it worked. And then, at long last, with a cigar clenched between his teeth, he cranked up the car, drove it out of the barn, and took his family for their long-awaited first ride.

Three years later, Chrysler was drawing an annual salary of $8,000 as works manager for American Locomotive, and he had been promised a raise to $12,000 -- a king's ransom in those times. But when Charles W. Nash, president of Buick, offered him a job as Buick's works manager at half the salary he had been promised by his old employer, Chrysler took it. The lure of the automobile industry was irresistible.

On the next page, learn how Chrysler began designing cars.

By 1916, Walter Chrysler was president of Buick, at a salary of half a million dollars a year. Three years later he was appointed vice-president of General Motors, in charge of operations. But GM president "Billy" Durant was a mercurial character, quite impossible to work for, at least from Chrysler's point of view. He quit. Just 45 years old, he had plenty of money, and no plans. He told his wife he was going to retire, though it's doubtful that she believed him.

In January 1920, at the behest of the bankers, he took over Willys-Overland, charged with straightening out that company's tangled affairs. His salary was a million dollars a year. Two years later, having set Willys-Overland on the road to recovery, he accepted a similar assignment at Maxwell-Chalmers, taking his pay this time in stock options.

It happened that during his two years with Willys-Overland, Chrysler had become acquainted with a team of three young engineers: Fred Zeder, Owen Skelton, and Carl Breer. This group -- Chrysler called them his "Three Musketeers" -- had developed a car that ultimately became the basis for Billy Durant's new Flint automobile (that's a story in itself).

But by the time Chrysler took the helm at Maxwell, the three men had established an independent consulting firm. Chrysler hired them at his own expense, charging them with the design of a new six-cylinder car to be built by Maxwell. Only this one wasn't to be a Maxwell. It would be a Chrysler!

The prototypes were ready by January 1924, just in time for the New York Automobile Show. But the new Chryslers were barred from being displayed there because they weren't yet in production. Learning that the Hotel Commodore would serve as headquarters for the show, Chrysler turned around and rented the Commodore's lobby, displaying his automobiles where nobody could possibly miss seeing them. 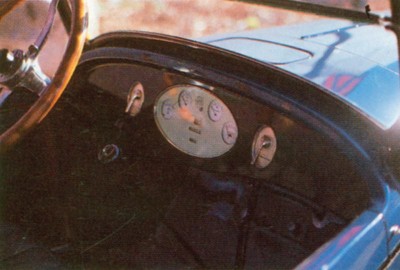 Like many cars of its era, the 1924 Chrysler placed the gauges in the center of the dash. The drum speedometer could easily be spun to show speeds of 70-75 miles per hour.
©Nicky Wright

The new Chrysler, known as the Model B, was a sensation. Priced head-to-head with the Buick Six, it was more than 700 pounds lighter than its rival, and correspondingly more nimble. Its engine boasted a 4.7:1 compression ratio, compared to the Buick's 3.5:1. Chrysler advertised that the new machine would accelerate from five to 25 miles an hour in seven seconds, which was considered phenomenal performance in 1924.

It would do 70 to 75 miles-per-hour top speed, much faster than the Buick-and within five miles an hour of the new Packard straight eight, a car that cost more than twice as much as the Chrysler. Furthermore, the new Chrysler featured hydraulic brakes, giving it stopping power to match its speed.

Other innovations, most unheard-of in production automobiles at that time, included aluminum pistons, full-pressure lubrication, tubular front axle, air cleaner, oil filter with removable element, and Lovejoy hydraulic shock absorbers -- all as standard equipment. The fully counterbalanced crankshaft was cradled in seven main bearings. Altogether, the new Chrysler stood out as a superb piece of engineering.

Compared to the competition, the Chrysler B-70, as it was called, was a relatively small car. The wheelbase was more than seven inches shorter than that of the Buick; overall, the Chrysler measured only 160 inches without bumpers, which was the way cars were delivered in those days. As a touring car, it weighed only 2,730 pounds, compared to the Buick's 3,455.

Worse, the Chrysler came to market at a time when competition was especially intense, forcing a number of veteran automakers -- Revere, Stevens-Duryea, Winton, Premier, Dort, Dorris, and Columbia among them -- to the wall. Skeptics said the new car would never sell.

But it was peppy, capable of zipping from five to 50 miles an hour in just 13 seconds. It was maneuverable, handsome to look at, and a delight to drive. And of course, it was an instant success. The B-70 was so successful, in fact, that it remained in production until July 1925.

Nine body styles were offered, ranging from the popular five-passenger touring to a pretentious town car. There was even a sedan called the Crown Imperial, the first automobile ever to bear that famous title. All nine were fitted to the same 112.75-inch wheelbase and powered by the identical 68-horsepower, six-cylinder engine.

On the next page, learn how the Chrysler Corporation came into being.

The Birth of the Chrysler Corporation

The new Chrysler was soon entered in competitive events, notably by the famed race driver, Ralph DePalma. Driving a stock B-70 touring car, on July 16, 1924, he climbed California's Mount Wilson in a record-breaking 25 minutes, 48 seconds, at times attaining a speed of 44 miles an hour in second gear. The contest involved a climb of 4,635 feet over a nine and a half mile course, with no fewer than 144 curves. Two months later, at Fresno, DePalma drove 1,000 miles in 1,007 minutes. Refueling stops excluded, his average speed was 68.3 miles per hour.

Meanwhile, the four-cylinder Maxwell had undergone a number of improvements. A three-bearing crankshaft was substituted for the earlier two-bearing job, which had an unfortunate tendency to whip at high rpm. Soon the car was being advertised as "The New Good Maxwell," which tells us all we need to know about the earlier models.

In June 1925, with Walter P. Chrysler firmly in control, the Maxwell Motor Company was reorganized as the Chrysler Corporation. By that time the Maxwell car was in its final season, though it would re-emerge in 1926 as the Chrysler 58. Eventually, the four-banger would metamorphose into a new marque, the Plymouth. But of course it was the B-70 on which the Chrysler reputation was built.

Next, get specifications for the 1924 Chrysler Model B-70. 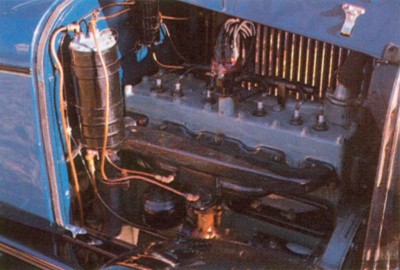 The 1924 Chrysler Model B-70 was the first car ever designed by Walter P. Chrysler. It proved to be a success, and Chrysler went on to found the Chrysler Corporation.

Get specifications for the 1924 Chrysler Model B-70.