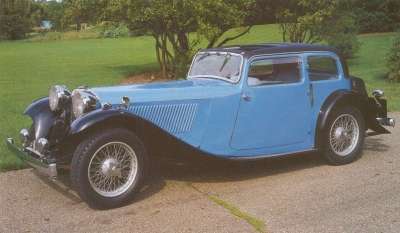 Early versions of the SS1 included this 'four-light saloon' from 1934.

Business was booming for Swallow in the 1930s. The busy factory, now stocked with experienced workers producing Austin-, Wolseley-, and Standard-Swallows and sidecars, was about to get even busier, as Lyons pushed for yet another design.

He had been making sketches and the most promising of these were turned over to an outside artist who worked with Cyril Holland to produce a prototype. Its shape was frankly inspired to a significant degree by the long hood and low roof of the L-29 Cord.

Some compromises were made in roof height at the time, though this was not enough to suit everyone: While Lyons was at home recuperating from an operation, Walmsley had the prototype car's roof raised by several inches, a move that pleased Lyons not at all.

Captain Black proved most cooperative. He agreed that Standard would furnish complete current-production chassis units for Standard-Swallows, as well as a much-modified six-cylinder chassis for the new car. Changes to the latter included new engine mounts that carried the engine farther back in the frame.

The agreement was amended to give Swallow exclusive use of the modified chassis after a small sum was paid to Standard covering the cost of unique tooling needed to produce the new frames.

No longer a Standard-Swallow, the new car introduced at the 1931 Olympia show was simply called SS1. Over the years, there has been much speculation about the name; did it stand for Standard Swallow, Super Sports, or something else? No one knows for sure.

For 1933, there was a "second-series" SS1. Its frame had been lengthened slightly and was under-slung at the rear. These modifications, plus a few subtle alterations to the fenders, improved the SS1's appearance.

Among the six-cylinder SS1 models offered in 1935 was the two-door sedan.

Three additional variations, the drophead coupe (convertible), "Airline" sedan, and short-wheelbase SS90 two-seat roadster, were produced during the 1935-1936 period. Lyons considered the fastback "Airline" a failure in design terms (it was slightly awkward-looking from the rear) but it sold fairly well.

A second line, the SS2, was also revealed in 1931. Smaller and less powerful -- it had a 1.0-liter inline four under its short hood -- the SS2 was considerably less expensive (£210 at introduction) than the SS1. Only three models (a coupe, four-seat sedan, and four-seat open tourer) were produced at times during the SS2's five-year life span, with the more commodious versions arriving only after the SS2's chassis was lengthened for 1934. A four-speed transmission was added in 1932 and the longer "series 2" cars had a choice of 1.3- and 1.6-liter L-head fours.

While the factory was still turning out Swallow sidecars, the Austin-Swallow had been dropped in 1932. The Standard-and Wolseley-Swallows went out of production the next year. In late 1934, William Walmsley, heavily involved with his model railroad hobby and tired of conflicts with Lyons, had had enough; he resigned from the company on amicable terms. Lyons then proceeded to take the company public in January 1935.

As one William left, another arrived. The newcomer was Bill Heynes, appointed by Lyons to the new post of Chief Engineer. One of his first tasks was development of yet another new car for the company that now filled all four buildings in the industrial block where it had started with one. This time, Lyons's sights were set on making his way into the lower end of the Rolls-Royce/Bentley market with a sleek four-door sedan.

The new car caused an immediate sensation among members of the press and the buying public when revealed at the 1935 Olympia Show. As well it should; Lyons was no longer interested in rebodying other makers' chassis and so commissioned Heynes to design a new frame built exclusively for SS.

Even the power-plant was modified. Brilliant engine-head designer Harry Weslake came up with an ohv conversion for Standard's 2.7-liter engine, which Captain Black cheerfully produced for Lyons's exclusive use. Only the base 1.5-liter version would have side valves under the hood.

Production of the SS1, SS2, and SS90 (the last not amounting to more than two dozen cars anyway) was wound down to make way for the new sedans. The ohv Weslake/Standard engine also found its way into a pair of open cars. One was an updated version of the four-seat tourer mounted on the new Heynes-designed chassis. The other was a true sports car that was destined to be a milestone in William Lyons's carmaking career: the SS100.

Essentially the SS90 with the new engine, larger brakes, hydraulic shock absorbers, and revised steering, the SS100 could shoot from zero to 60 mph in 12.8 seconds and hit a top speed in excess of 90 mph.