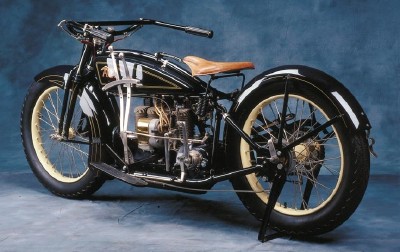 The 1920 Ace had a short life due to financial setbacks and the death of its creator, William Henderson. See more motorcycle pictures.

Ace produced a great product but proved to be a short-lived proposition. The firm was suffering financial setbacks when William was killed in a motorcycle accident in 1922, and production ceased two years later.

Indian Motorcycle Company purchased Ace in 1927, and continued to offer what was essentially the Ace four -- wearing Indian logos, of course -- until World War II.

The Ace was powered by an F-head inline four displacing 77 cubic inches. Power was transferred through a foot-operated multidisc wet clutch to a three-speed transmission with hand shift.

The leading-link front fork compressed a cartridge-type internal coil spring, but the rear wheel was attached to a rigid frame.

Weighing in at about 395 pounds, the 1920 Ace wasn't particularly light, but it proved to be both powerful and durable. Several transcontinental records were set on virtually stock machines, and a "hopped up" version called the XP4 set a record speed of 129 mph in 1923.

The fact that this motorcycle continued in production for over two decades with little more than suspension and brake updates is further testament to its endearing design.

Check out the next page for more photos of the 1920 Ace motorcycle.