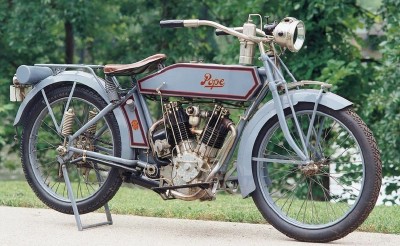 The 1918 Pope L-18 was of high quality and boasted advanced engine and suspension design, but was the last motorcycle from Pope Manufacturing Company. See more motorcycle pictures.

The 1918 Pope L-18 motorcycle represented the quality buyers had come to expect from the Pope company; sadly, it was also the last motorcycle Pope would build.

Pope Manufacturing Company had been building Pope-Tribune automobiles and Columbia bicycles for years before it combined the two concepts and began producing motorcycles in 1911.

Those early models were single-cylinder bikes, but a V-twin followed in 1912, and by 1918, Pope was known for quality construction and innovative engineering.

The 61-cubic-inch V-twin in the 1918 Pope L-18 motorcycle illustrates the point well.

It features overhead valves at a time when most competitors had flathead or F-head engines. Crankcases were cast from an aluminum alloy, and each set of pistons and connecting rods was matched with another pair of the exact weight. Its Armored Magneto ignition allowed use in all types of weather.

The front suspension consisted of a trailing link actuating a leaf spring. But perhaps the most intriguing aspect of this Pope was the presence of a rear suspension, a comfort and control feature unusual at that time.

The rear-suspension design of the 1918 Pope L-18 motorcycle was uniquely Pope's. Unlike the common swingarm used on modern motorcycles, Pope mounted the rear axle in a carrier that moved up and down between two posts, compressing a pair of springs on impact. Wheel travel was minimal, but something was better than nothing, and this became a major selling feature.

Unfortunately, the 1918 Pope L-18 motorcycle represents the last of the line. With World War I raging in Europe, Pope suspended motorcycle production late in 1918 to concentrate on building machine guns. After the war, only the bicycle portion of its business was revived.

Continue to the next page for more pictures of the 1918 Pope L-18 motorcycle. 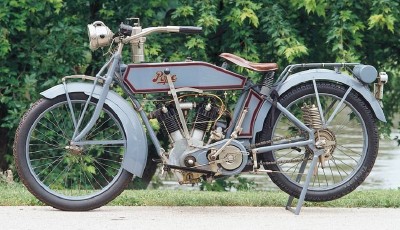 Pope Manufacturing Company turned to war production in 1918, and its motorcycle business ended with the 1918 Pope L-18.

The L-18's headlamp burned acetylene, which was stored in the polished tank mounted behind the handlebars.
The cylinder on the rear fender was a tool carrier.
Pope's unique rear suspension was a huge selling point for the L-18.