by the Auto Editors of Consumer Guide
Next
The 1916 Chevrolet Series 490 transformed Chevy from an also-ran into a major player, as the young company move downscale to compete seriously against Ford's phenomenally popular Model T.

In reality, with a full electrical system, the 490 actually cost $550 more. Chevrolet responded to Ford's price cut by offering its car for $490 complete, but that figure quickly proved unprofitable, so the price of a properly equipped touring car or roadster reverted to $550.

Spanning a 102-inch wheelbase, the down-to-basics 490 was built in franchised plants to cut costs and hasten delivery. A simplified variant of the 171-cubic-inch four-cylinder engine from the Series H yielded 20 horsepower (same as the Model T). Painted only in black -- again like Ford -- the lightweight 490 had a cone clutch and three-speed transmission. Within 17 days, Chevrolet Motor Company had 4,661 orders with cash deposits. Durant claimed that "a little child can sell it," and more than 18,000 were built in the first year.


For more picture-packed articles about Chevys and other great cars, see: 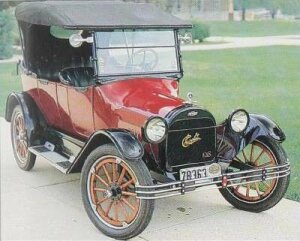