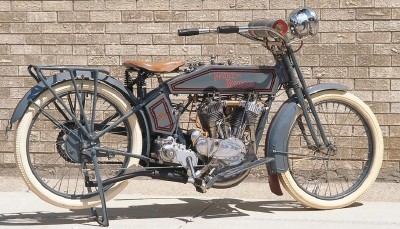 The 11-horsepower output of the 1915 Harley-Davidson 11F was guaranteed in writing by the company. See more motorcycle pictures.

The 1915 Harley-Davidson 11F motorcycle is one of the Wisconsin company's first models to benefit from the advances in design and technology by the engineers at Harley-Davidson.

Technology advanced rapidly at Harley-Davidson during the 1909-1915 time frame. The company's first V-twin arrived in 1909, though it was taken off the market in 1910 to fix some bugs and reintroduced the next year.

This was followed by chain drive and one of the industry's first clutches in 1912, and a two-speed rear hub in 1914, which also saw the advent of floorboards and the Step Starter.

For 1915, a proper three-speed transmission was offered, along with a magneto and electric lighting system incorporating a taillight that could be removed for use as a nighttime service light.

The model featured in this article, however, is equipped with a Prest-O-Lite headlight, which is powered by acetylene gas.

Harley-Davidson's 61-cubic-inch F-head V-twin, while not a true overhead-valve design (only the intake was ohv), was more advanced than the flathead engines that powered some competitors.

Furthermore, the 1915 models gained an automatic oiler and larger intake valves, the latter helping to boost output to 11 horsepower. That rating, by the way, was guaranteed by Harley-Davidson, the only motorcycle manufacturer to back its quoted power claims in writing.

Elsewhere, the 11F was perhaps not so advanced. The expanding-band rear brake now featured double action to increase braking efficiency, yet was far from state-of-the-art, and the front suspension remained a leading-link arrangement with coil springs that allowed only slightly more wheel travel than the nonexistent rear suspension.

Go to the next page for more pictures of the 1915 Harley-Davidson 11F motorcycle. 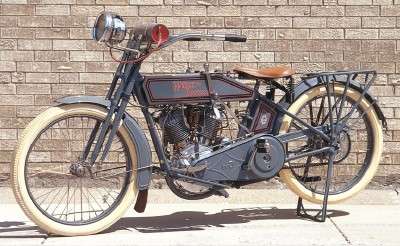 A three-speed transmission was offered for the 1915 Harley-Davidson models.

The 1915 Harley-Davidson 11F motorcyle was equipped with a fuel tank that performed double-duty as the oil carrier, and boasted a shifting mechanism that had a gated guide plate.

Electric lighting was newly available, but this model is equipped with an old acetylene system.
An exposed valvetrain was common in the era, and was fascinating -- and often messy -- in action.
This little tyke is no doubt dreaming of the day when he can ride a motorcycle of his own.