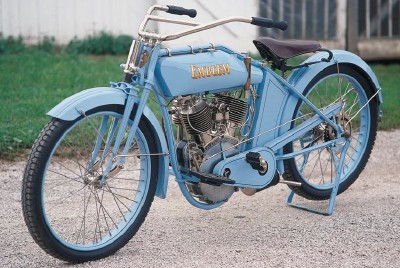 The 1915 Emblem Twin motorcycle was a bold offering from a company struggling to remain afloat amongst fierce competition and the ravages of an economic recession.

By 1915, motorcycle manufacturers were springing up like weeds and a horsepower race was in progress. Each manufacturer claimed to outrun, outclimb, or outlast all the rest, and Emblem was no exception.

Emblem advertising that year stated that its twin displaced 76.6 cubic inches, "16 more than any other motorcycle motor."

According to the Emblem sales brochures, each Emblem twin had to be ridden in excess of 70 miles per hour before it would be shipped. A test card accompanying each bike indicated the speed that had been reached.

Emblem started out in 1907 with a single-cylinder machine, graduating to the big V-twin in 1913. Oddly, Emblem chose to reduce the displacement of its twins as time progressed, culminating in a lightweight 32-cubic-inch model for 1917.

But that's not what American riders wanted, and most Emblems ended up being sold in export markets until the company's demise in 1925.

Keep reading for more pictures of the 1915 Emblem Twin.

Partially enclosed at the rear of the fuel tank is a hand pump used to feed additional oil to the engine.

The engine of the 1915 Emblem Twin motorcycle was relatively large, but was of conventional intake-over-exhaust design, and its exhaust valve springs and pushrods flanked the exhaust pipes.

The seat was cushioned with two large leaf springs and a sprung seatpost.
At 76.6 cubic inches, Emblem's V-twin was larger than most others of the time.
The overhead intake valves were actuated through exposed pushrods and rocker arms.