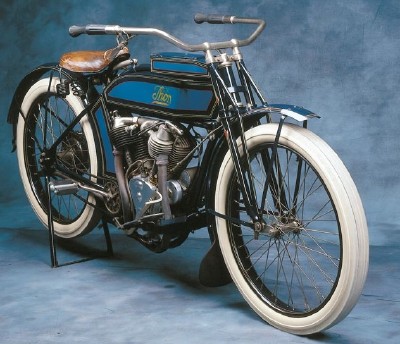 The 1914 Thor is a fine example of early motorcycle design, though the company would stop building motorcycles after 1917. See more motorcycle pictures.

The 1914 Thor motorcycle was from a company that played an instrumental role in the early years of motorcycle history, not for its machines as much as its engines. In fact, many early motorcycle manufacturers got their start mounting Thor powerplants in frames of their own choosing.

Owned by the Aurora Automatic Machinery Company, Thor began building engines for Indian in 1902. Later clients of note included Reading Standard and Sears, along with a host of lesser-known makes.

When the contract with Indian ran out in 1907, Thor began building its own motorcycles.

Early examples used a version of the Indian-designed single Thor had been producing for five years, and when Thor introduced its first V-twin in 1910, it was essentially the same engine with another cylinder bolted to the cases.

But unlike most such designs, it was tilted forward so that the rear cylinder stood straight up, leaving room behind for the magneto and carburetor.

By 1913, Thor had introduced a new V-twin of its own design, and this one was mounted in the conventional manner. Displacing 76 cubic inches, it enjoyed some racing success, but was always in the shadows of Indian and Harley-Davidson on the track.

Like so many other manufacturers of the period, Thor eventually succumbed to a competitive environment. Its last motorcycles were built in 1917, after which the parent company concentrated on power tools and appliances. 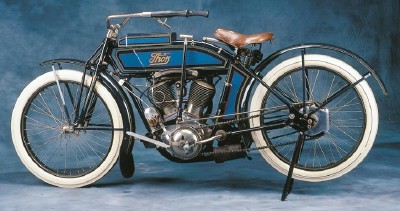 Thor enjoyed some racing success, but it was always in the shadow of Indian and Harley-Davidson.

The 1914 Thor motorcycle was a good example of a transitional design, tipping the scales more toward a real motorcycle and away from the motorized bicycles that had typified motorcycle design earlier in the century .

The V-twin engine was of conventional intake-over-exhaust layout, but Thor ran the intake pushrods between the cylinder fins.
The 1914 Thor was available in single and two-speed drive, the latter shown here with
Thor's name was stylishly painted.