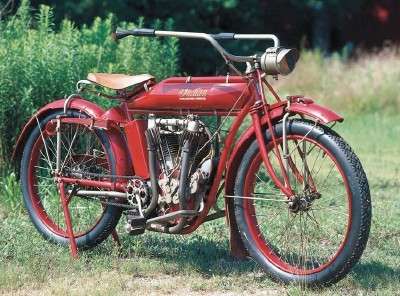 The 1913 Indian 61 Twin has a V-twin engine, which comprised 90 percent of Indian's engine

The 1913 Indian 61 Twin motorcycle was typical of the performance bargains available from this great American motorcycle maker in the early 20th Century.

Indian had offered its first V-twin in 1907, a 40-cubic-inch (633-cc) unit with atmospheric intake valves, which were common at the time. By 1913, it had grown to 61 cubic inches and boasted overhead intake and side exhaust valves.

Though standard models had but a single speed, a two-speed transmission was available as an option.

Indian built singles during this period as well, but the V-twin accounted for 90 percent of the company's production.

It's not difficult to see why: In 1913, for example, a four-horsepower single cost $200, while a seven-horsepower twin went for $250. That was clearly more bang for the buck.

New for 1913 was a "Cradle Spring Frame" that incorporated the world's first swingarm rear suspension system--though it was somewhat different in design than what we commonly see today.

When the rear wheel encountered a bump, two vertical rods actuated a pair of leaf springs attached to the frame beneath the seat. This joined a conventional (at least for Indian) trailing-link front fork that worked in a similar fashion.

For those suspicious of the new technology, a rigid frame remained available. Braking was accomplished with an internal shoe/external band rear brake, which incidentally conformed to Britain's "dual brake" requirement for motorcycles sold in that country--though it might not have been exactly what the Brits had in mind.

See the next page for more photos of the 1913 Twin 61 motorcycle. 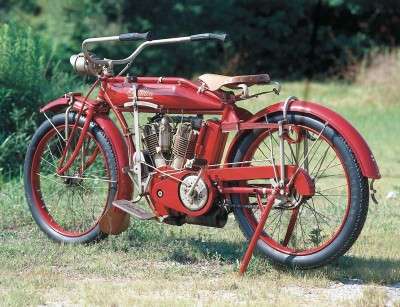 The 1913 Indian 61 Twin made use of leaf springs for not only its front and rear wheels, but as a suspension for the rider's seat, too.

The 1913 Indian 61 Twin used cutting-edge technology for the era to ensure a smooth ride and efficient acceleration.

A small oil pump beneath the seat feeds more oil
The front suspension, like the rear suspension, made use of solidly anchored leaf springs.