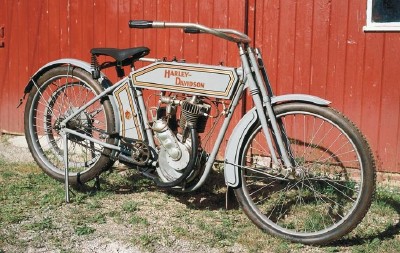 The 1912 Harley-Davidson X8A motorcycle was a far more advanced model than Harley-Davidson's first motorcycle, built in 1903. That one was little more than a bicycle with a single-cylinder three-horsepower engine mounted within the frame tubes.

Though the V-twins that would make the company famous appeared six years later, single-cylinder machines continued to represent the bulk of Harley's sales. By 1912, public demand for more power was answered with the X8A, which was powered by a 30-cubic-inch single producing 4.3 horsepower.

A hand-operated oil pump was added to augment the existing gravity-feed system, and a magneto ignition was used for easier starting. Also new this year was the "Free Wheel Control," one of the industry's first clutch systems. With it, smooth takeoffs from a standing start were possible for the first time.

The issue of comfort was also addressed. Joining Harley's traditional leading-link front fork was the new "Full Floating" saddle, in which a coil spring mounted inside the vertical frame tube cushioned the seatpost, while the rear of the seat was supported by two more coils.

Though this was hardly a substitute for a real rear suspension, it was as good as Harley riders would get for another 45 years.

Go to the next page for more pictures of the 1912 Harley-Davidson X8A motorcycle. 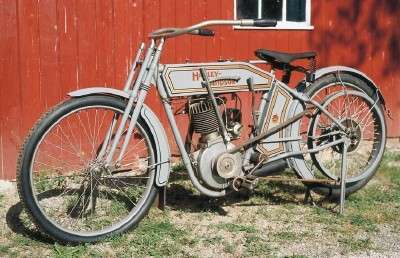 Though the Harley-Davison X9A's 4.3 horsepower doesn't sound like much, it represented a lot of muscle for 1912.

While many companies had gone to a mechanical intake valve by this time, the 1912 Harley-Davidson X8A motorcycle stuck with an atmospheric intake valve.

A tall lever on the left side of the tank activated the "Free Wheel Control," Harley's early clutch system.
The atmospheric intake valve was located beneath the small dome at the top of the engine's right side.