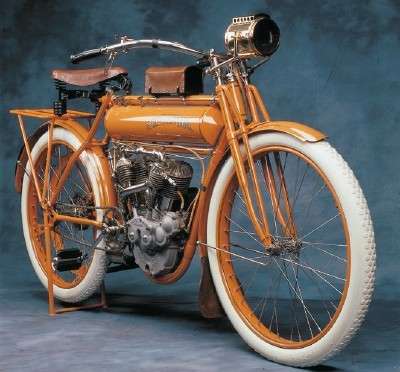 Despite innovative models such as the 1911 Flying Merkel, the Merkel company would be out of business by 1916. See more motorcycle pictures.

The 1911 Flying Merkel motorcycle was the ground-breaking offering from the company that blazed a design trail in the early 1900s.

In the early days of motorcycling, Merkels were the bikes to beat. Small singles of 1902 evolved into thundering V-twins by 1910, at which point the machines adopted the aptly descriptive "Flying Merkel" moniker.

The company was also known for innovation. Front forks that looked rigid were actually mounted on sliders with enclosed springs either at the top of the sliders or inside the frame neck. The design that became known as "Merkel-style forks" were popular add-ons to other manufacturers' racing bikes.

Merkel also was a pioneer in rear suspension; 1910 models offered modern swingarm designs incorporating sliders similar to those used on the forks.

None of this, however, was enough to keep the Flying Merkel aloft. Despite 1915 models that offered a kickstarter, front and rear suspension, sprung saddle, two-speed planetary transmission, and a powerful 1000-cc intake-over-exhaust V-twin, they would prove to be the final offerings of one of motorcycling's most innovative pioneers.

See more pictures of the 1911 Flying Merkel motorcycle on the next page. 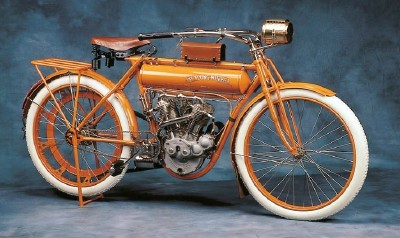 The 1911 Flying Merkel motorcycle offered V-twins of 885 and 1000 cc's, along with the customary single-speed belt drive.

A swingarm suspension on the back used sliders similar to those on the forks.