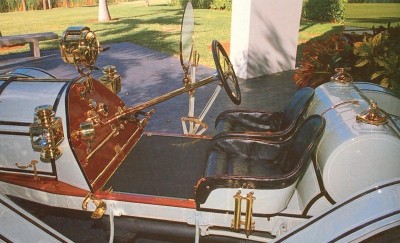 The 1912 Mercer Raceabout was still part of the brass-age era, which endears it to collectors. Note the dash, lights, and gas-filler caps. The seats were true buckets, the seating position quite low. See more classic car pictures.
©Mike Mueller

Mention the name Mercer to almost any car buff and you'll get an instant response: "Raceabout." For of all the cars built by the Mercer Automobile Company during its 15-year (1910-1925) lifespan, the sporty 1911-1915 Mercer Raceabout Model 35-R was by all odds the most famous.

But not, perhaps surprisingly, the most numerous. Mercer was never a large-scale producer in any case, but the bulk of its output was comprised of more conventional body styles: roadsters, touring cars, sport phaetons, and sedans. There were even a few formal types, such as town cars and limousines, though coachwork of that sort must have seemed out of place on a chassis that was built primarily for speed, rather than comfort.

Mercer had its genesis in Trenton, Mercer County, New Jersey in 1909. Bankrolling the company was the Roebling family, builders of the Brooklyn Bridge, along with the Kusers, another very wealthy clan. It's not clear who designed the original Mercer automobiles, but in any case they appeared in 1910, powered by four-cylinder, L-head Beaver engines.

Three body styles were offered: Toy Tonneau, Touring, and Speedster. Each was priced at $1,950, about 20 percent higher than the contemporary Cadillac Model 30. They were low-slung, fast, and rugged, as C.G. Roebling insisted they should be.

It was a respectable start, though hardly the stuff of which legends are made. But young Washington Roebling II, one of the financial "angels" of the operation, wanted something more. And at the same time, something less. That is, he wanted to build a very fast automobile, and if it happened to be short on creature comforts, so be it.

To design this new machine, Washington Roebling acquired the services of a talented engineer whose impressive name was Finley Robertson Porter. But Roebling himself played an important role in developing what was to become the original Mercer Raceabout. This is how automotive writer Ralph Stein describes its story:

"Much of the credit for the Raceabout's uniquely satisfying lines belongs to Washington A. Roebling II...Young Washington...wanted the 35-R Mercer to be a low-slung machine. This insistence on lowness gave the car its own lovely shape and made every other bucket-seated, bolster-gas-tanked speedster look high and awkward. ... The engine sat low between the tall wheels. This in turn raised the fender line in relation to the hood.

"Thus the rear line of the front fenders and the fronts of the rear fenders swept downwards at a sweetly shallow angle to the short, high running boards, which were far closer to the low chassis frame than on similar cars. The rake of the steering column, perforce, also had to be sharper in order to place the steering wheel comfortably in the driver's hands, since the low hood line allowed the cushions of the bucket seats to be set right on the floor without impairing visibility. The result: perfection!"

Continue to the next page for more on the 1911 Mercer Raceabout Model 35-R. 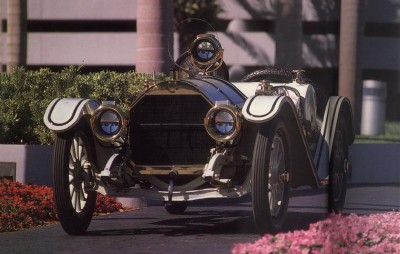 Though New Jersey-based Mercer was never a large-scale automaker, it achieved fame far beyond what that firm's modest size would have suggested. That was mainly because of the Raceabout, a low-slung, out-and-out speedster.
©Mike Mueller

Introduced late in 1910, the 1911 Mercer Raceabout Model 35-R was as light as it was low. A spartan machine, it had almost no body at all: just a pair of bucket seats, a 25-gallon fuel tank, and a five-gallon oil tank perched atop the frame. As Stein once observed, one didn't sit in the Raceabout; one sat on it.

Happily, the Raceabout went even better than it looked. It was powered by a 300-cubic-inch, T-head four-banger, with cylinders cast in pairs, after the common practice of the time. Officially rated at 34 horsepower, it was almost certainly good for more than 50 -- the figure 58 has been mentioned.

A wet, multiple-disc clutch was used starting in 1914, replacing the original leather-faced cone type. And although a three-speed transmission was employed at first, by 1913 it was replaced by a four-speed gearbox, a welcome improvement.

In view of the almost total absence of a body, the Raceabout's $2,250 price was considered a stiff one. One could, if desired, have a similarly-powered four-passenger Toy Tonneau for another $500, but it is the Raceabout that has become almost legendary. And while these two high-speed models -- Raceabout and Toy Tonneau -- were finding their place in the rapidly expanding automobile market, production of the more traditional Beaver-engined Mercers was continued for only one final season.

As Henry Ford had been quick to discover, the way to gain publicity for an automobile -- almost any automobile -- in those pioneer days was to take it to the racetrack. Washington Roebling understood the value of that sort of publicity, so during 1911 Mercer Raceabouts were entered in six major events, copping top honors in five of them -- along with two seconds and one third place.

Captain of the Mercer driving team was Ralph DePalma, one of the leading drivers of his generation. DePalma personally racked up eight new world's records during his time with Mercer.

The one contest in which the Raceabout failed to triumph, incidentally, was the very first "Indy 500," where Mercers placed 12th and 14th. But five out of six is a very creditable record for a brand new car. And in any case, in the grueling 500-mile contest at Indianapolis, just to finish at all was considered a major achievement.

Follow the Mercer Raceabout story through 1915 on the following page. 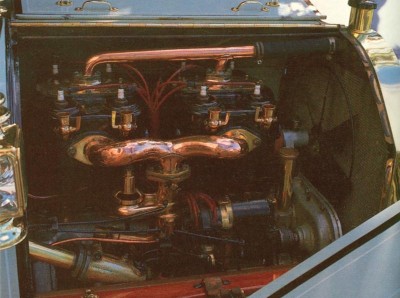 Powering the 1912 Raceabout was an inline T-head four (above), which was cast in pairs. With a displacement of 300 cubic inches, it cranked out 58 horsepower, enough for a top speed of about 75 mph.
©Mike Mueller

The 1912, 1913, 1914, 1915 Mercer Raceabout Model 35-R went through some turbulent times. By 1912 Mercers, thanks to their combination of speed and superior handling qualities, were winning races all over the country, securely establishing the make's reputation. But on April 15 of that year, tragedy struck: Washington Roebling II went down with the Titanic when it struck an iceberg off the coast of Newfoundland.

Mercers continued to race, and to win, following the death of Roebling, with Ralph DePalma still serving as the team's capable captain. But then in 1913, Finley Porter, evidently on the premise that two champions on the team were better than one, hired Barney Oldfield as a member of the Mercer team.

DePalma, furious at what he considered to be a deliberate slight, quit in a huff and signed on with Mercedes, and it was in a Mercedes that he won the 1915 Indy 500.

DePalma's resignation was followed in 1914 by that of Finley Robertson Porter, who left in order to produce a car of his own. Named for Porter's initials, the F.R.P. was a big, expensive machine, powered by a 100-horsepower engine. Unhappily, it was not commercially viable, nor did its successor, the even costlier Porter, fare any better.

Meanwhile, with Mercer Raceabouts continuing to distinguish themselves on the nation's racetracks, a new chief engineer arrived at the Trenton factory. This was Brooklyn-born Eric Delling, who at a later time would produce a fine steam automobile under his own name.

A monocle windshield on the Mercer Raceabout did little to protect the driver from the elements; goggles were highly recommended.
©Mike Mueller

Delling took the company in a new direction, developing for 1915 a somewhat larger series of cars, powered by an L-head four-cylinder engine of his own design. The Raceabout was given a heavier, more conventional, and considerably more comfortable body, while the wheelbase was stretched from 108 to 115 inches.

The Delling Mercers were ahead of their time in a number of respects. Their 73-horsepower engine was fitted with a centrifugal water pump, instead of relying on the thermo-siphon system commonly used in those days. A drilled crankshaft facilitated full-pressure lubrication.

Roller tappets were used, and both main and connecting rod bearings were of the insert type, bronze-backed and babbitt-lined. Pistons were made of aluminum. Also highly unusual was the latter-day Mercer's 1.8:1 stroke/bore ratio. Connecting rods measured 14 inches, center-to-center.

Other mechanical features of the Delling-designed Mercers included a dry multiple-disc clutch; four-speed gearbox; U.S.L. starting and electrical system, contained, remarkably enough, in the flywheel; service brake consisting of a huge drum on the driveshaft; and the industry's first hydraulic shock absorbers.

Delling left Mercer in 1916, although his steamer didn't appear until 1923. The Mercer automobiles were little changed for several years following his departure, however. By 1919, F.W. and C.G. Roebling had both followed Washington Roebling in death, and control of the company passed to a Wall Street syndicate. Joining with Simplex and Locomobile, it became a part of the short-lived Hare Motors, but two years later control was returned to a group of veteran Mercer staff members.

A Rochester-powered overhead-valve six appeared in 1923, a fine 84-horsepower car selling for as much as $5,000. But the Raceabout was gone. Production, which had never amounted to more than 500 cars a year, was halted in 1924. Restarted some months later, the factory stumbled on for a time, turning out no more than a handful of cars, doubtless assembled from stock on hand. And then, early in 1925, it was all over. 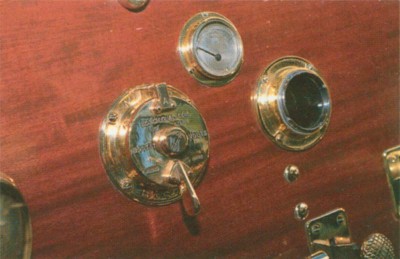 Befitting its dapper, driver-oriented attitude, the Raceabout was sparsely fitted, including even instrumentation, but a drum-type speedometer, odometer, and trip odometer were provided.
©Mike Mueller