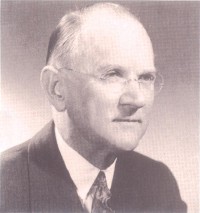 Ward Canaday was not an engineer. He was not really an automobile man at all, although he was responsible for introducing installment buying to the industry. But he did his homework, and in time acquired some understanding of the major engineering problems involved in automobile production. This was a major step in the development of the jeep.

It came to Canaday's attention that Delmar G. "Barney" Roos, formerly chief engineer at Pierce-Arrow, Locomobile, Marmon and -- more recently -- Studebaker, was working for the Rootes Group, in England. Roos had evidently never regarded this as anything more than a temporary assignment, and in 1938, having been out of the country for a year, he was ready to come home.

Canaday hired Roos, installing him as executive vice president and chief engineer of Willys-Overland. It was an inspired choice, for Barney, a former president of the Society of Automotive Engineers, was one of the finest engineers in the industry. And best of all, he had -- despite his earlier affiliations with gargantuan automobiles like Locomobile and Pierce-Arrow -- a particular interest in small cars.

Had Barney Roos been hired by an industry giant -- General Motors, perhaps -- or even a well-financed independent such as Packard or Nash, his obvious course of action would have been to design a new engine from scratch (something he had done several times). However, at Willys that was impossible -- the company was virtually broke.

So the resourceful Roos wrought a low-cost miracle. Taking that venerable Whippet-cum-Willys 77 four-banger, he tunneled out the intake ports and increased the diameter of the intake manifold. A Carter 1-1/4-inch plain tube downdraft carburetor was fitted. The compression ratio was boosted from 5.70:1 to 6.48:1; Aluminum pistons replaced the old cast iron jugs. Cleveland graphite micro precision bearings and manganese valve springs were fitted. The crankshaft was strengthened and counterweighted. A quieter air cleaner and fan were devised. Taken together, these modifications raised the horsepower from 48 to 61 and resulted in much greater durability, as well.

Just to be sure he had it right, Barney directed his staff to run test engines wide open (4,400 rpm) continuously for 100 hours. That kind of abuse would have destroyed the original engine in short order. In fact, a test in which one of the older jobs ran for 22 minutes at 3,400 rpm resulted in scored cylinders and burned-out rod bearings. But the Roos-designed version held up admirably.

The initial application of the Roos engine (eventually dubbed the "Go-Devil") came in 1939, in a new Willys model bearing an old name: Overland. It bristled with improvements, including hydraulic brakes and a larger capacity cooling system. Beneath it all was a stout new frame, reinforced by a rugged X-member. By any measure, it was a much-improved car with a much-improved engine.

Without knowing it, Bantam and Willys had separately created what has become known as the jeep. Bantam, with its original body design, and Willys, with Barney Roos's "Go-Devil" engine, had conspired to lay the groundwork for the vehicle that would change the face of modern warfare and continue unchanged for generations to come.

However, the two companies were still far from sharing their information. It would take the U.S. Army and a world war to bring them together.