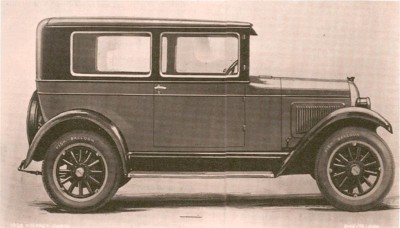 The 1928 Whippet Coach was one of the low-priced automobiles that Willys-Overland produced before the jeep.
©Chrysler LLC

The first design for the military unit that would eventually become the jeep was declared to make history. Following this declaration was a series of merciless tests, designed to show up even the slightest weakness in design and construction.

The test took the Bantam over 3,410 miles, only 247 miles of which were logged on paved roads. Twenty separate flaws were detected, ranging from a loose grille to the failure of both frame side rails. But in their final remarks, the testers concluded, "The vehicle demonstrated ample power and all requirements of the service."

On hand to observe the Bantam's performance were representatives from both Willys and Ford. While Ford's involvement in the war was to be expected, the inclusion of Willys might seem a bit strange. However, Willys's involvement would come to play a very important role in the final development of the jeep that Bantam had pioneered.

Over the years, Willys-Overland had built some interesting products. The mainstay of the line, traditionally, was the Overland, a conventional, moderately priced four-cylinder machine. In mid-1926, Willys-Overland introduced the perky little low-priced Whippet. And it was this car that was responsible for the company's spectacular sales gain during the late 1920s.

However, the Whippet's success proved to be of short duration. By 1930 an L-head "six" bearing the Willys name was the company's mainstay, augmented by a trickle of four-cylinder Whippets and a handful of Willys-Knights.

In an attempt to tailor the product to the times, in Depression-racked 1933 Willys-Overland dropped all of its full-sized lines to concentrate upon the diminutive, four-cylinder Willys 77. Priced as low as $335 for the coupe -- $105 less than the four-cylinder Ford-the "77" was expected to revive the company's fortunes by making a new car available at what amounted to a used-car price. The old four-cylinder Whippet engine was dusted off for this application, providing the new model with a highly favorable power-to-weight ratio, and thus with sparkling performance.

Sales, however, failed to live up to expectations, though production for 1935 showed a 150-percent gain over 1934's low point. John North Willys died that August, and the task of reorganizing Willys-Overland fell to financier Ward M. Canaday. Canaday managed somehow to raise three million dollars, with which he bought up the company's outstanding bonds for 70 cents and claims for 25 cents on the dollar.

In a year's time, he and his associates held a two-thirds common stock equity in the reborn Willys-Overland Motors, Inc. Canaday served as chairman of the board, while the presidency of the company went to Dave Wilson, whose Foundry and Machinery Company had been supplying Willys-Overland with castings.

A dramatically styled new Willys was introduced for 1937. The drivetrain was essentially unchanged, and the wheelbase remained at 100 inches. Tread was widened by five inches, both front and rear. Bodies were roomier; and the appearance of the Willys 37, though still unusual, was far more attractive than that of its predecessor. Production quadrupled, to 76,803 units for the year.

Problems, however, remained. Chief among these was the dismal (and only partly deserved) reputation of the aging Whippet engine. Thanks in no small measure to the merciless beating it had received from lead-footed owners of both the Whippet and the Willys 77, the little four-banger had become known for excessive oil consumption, fried bearings, water pump failures, and leaking cylinder heads.

Since the driving habits of American motorists were not likely to change, something would have to be done to beef up the engine if the Willys reputation was to be restored. Learn about this new jeep engine in the next section.