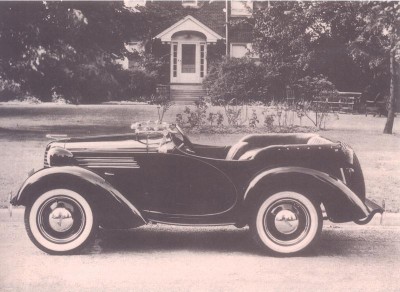 Besides the original design work for the jeep, American Bantam also produced cars such as the 1938 Model 60 speedster.
©Chrysler LLC

Designing the military utility vehicle that would later become the beloved jeep was an appeal that Karl Probst could not refuse. He knew the weight limit was impossible, but nobody else could meet that requirement either, so he put that concern out of his mind.

That night, driving his 1938 Buick coupe, he headed for Bantam headquarters, at Butler. By 1 P.M. the following day, Probst was seated at a drafting table, laying out plans for what was to become the immortal jeep.

And by Friday evening -- no more than 33 hours later -- the first jeep design was completely roughed out. Karl Probst couldn't have known it at the time, but he had created a phenomenon -- and a legend.

Saturday was spent in estimating costs and weights, making blueprints, and filling out bid forms. The estimated weight came to 1,850 pounds -- more than a quarter of a ton over the limit. But on Sunday, when Probst and Fenn met with Bantam's Washington representative, retired Navy Commander Charles Payne, they were told that the bid should be made on the basis of the fictional 1,300 pound estimated weight, lest it be rejected on that alone.

On Monday, July 22 -- five days after Karl Probst first put pencil to paper -- Bantam submitted its bid, complete with layouts. Willys submitted only a time and cost bid. Ford and Crosley representatives hadn't progressed even that far. The Willys bid was the lowest, but it was deemed unacceptable because the company's chief engineer, Barney Roos, could see no possibility of building 70 pilot units by the Quartermaster Corps's deadline. So the struggling American Bantam Car Company got the initial contract.

Actually there was very little of the vehicle that was of Bantam's own manufacture. Its small engine fell far short of the required horsepower; so a Hercules four was selected, later superseded by a 40-horse-power Continental. Axles were modified from units built by Spicer for the Studebaker Champion. The transfer case was also from Spicer, the transmission from Warner Gear. And so it went.

The 70 pilot cars were to be divided among the Infantry, Cavalry, and Field Artillery. Eight of these pilots would be equipped with four-wheel steering. Each was to cost no more than $2,500 -- enough, Probst correctly figured, to allow a reasonable profit to the manufacturer. And the first car was to be delivered to the Holabird Quartermaster Depot at Baltimore, Maryland, by 5 P.M. on September 21, 1940 -- a ridiculously short time line.

The first hand-built prototype, officially the BRC Quarter-Ton General Purpose Vehicle, was complete and running by September 21. To a remarkable degree, it resembled the later, standardized jeep, though its grille was rounded rather than flat.

To break in the engine, Probst and plant manager Harold Christ drove the prototype to Holabird under its own power, arriving just half an hour ahead of the 5 P.M. deadline. As Karl Probst later recalled the experience, "We drove slowly at first, telling ourselves it was important to break the vehicle in. But as we wound through the hills of Pennsylvania, the five o'clock deadline we had worked toward for those seven weeks seemed to come closer. To make Holabird come closer too, we were soon pushing the car to the limit, and it really was fun."

By way of an initial demonstration, the Bantam undertook to climb a 60-percent grade, accomplishing the feat easily in second gear. Then Major Herbert J. Lawes, Holabird's purchasing and contracting officer, put the vehicle through its paces.

When he brought it back he said to Probst, "I have driven every unit the services have purchased for the last twenty years. I can judge them in fifteen minutes. This vehicle is going to be absolutely outstanding. I believe this unit will make history!"

Keep reading to learn about the involvement of Willys-Overland in the history and creation of the jeep.