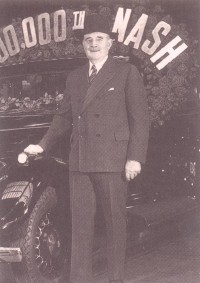 The Thomas B. Jeffery company was purchased by Charles W. Nash in 1918.
©Chrysler LLC

The development of the jeep began with a search for a four-wheel-drive utility vehicle, which first came about with various early truck models. These included vehicles built by the Thomas B. Jeffery Company.

In time, there were trucks bearing the Jeffery name, and by 1913 the company was building a four-wheel-drive commercial vehicle called the Jeffery Quadruple-Drive Truck, or simply the "Quad." Designed to meet the requirements of the U.S. Army, the Quad was powered by a 36-horsepower, four-cylinder Bud engine. It had a one-and-a-half-ton capacity (plus 20 percent overload) and was capable under its own power of going anywhere that a four-mule team could haul a load.

As John Gunnell has reported, "After its test the Quartermaster's office announced the following about the Quad in an official report: 'It plowed through hub-deep mud and sand that were absolutely impassable to any rear drive truck. It lifted itself bodily over a bulk of lumber sixteen inches high. It ran up and down seemingly impossible grades with ease. It forded a stream in which only the tops of the tires showed above the water.' "

In some respects, the Jeffery Quad (known as the Nash Quad after 1916, when former General Motors President Charles W. Nash bought the company) was a remarkably advanced machine. Although the truck was large, four-wheel steering allowed a turning circle of only 45 feet. Equally unusual for the time was the Quad's use of four-wheel brakes, said to be capable of stopping the heavy rig within eight feet from a speed of 15 miles per hour. Its builders liked to boast that "it drives, steers, and brakes on all four wheels" -- an impressive claim, and a valid one.

Respected by both military and civilian users, the Quad proved to be enormously popular. Production at Nash's Conch factory peaked at 11,490 units during 1918, with additional trucks built under license by Hudson, Paine, and National. Demand dropped off sharply after the Armistice, of course; but production of the civilian Nash Quad continued -- albeit on a limited scale -- until 1928.

The four-wheel-drive concept had proven its worth beyond any shadow of a doubt. However, for military purposes a smaller, lighter, nimbler machine was needed. For one thing, the big, ponderous FWD and Nash four-wheelers presented altogether too visible a target for enemy gunfire. In addition, these vehicles were far from fleet. Motorcycles were used as messenger vehicles in those days. But even when equipped with sidecars, their carrying capacity was very limited; and their lack of stability over rough and muddy terrain was not satisfactory.

In the years just after World War I numerous experiments were made with "Field Cars." Perhaps the best known of these was a Model T Ford, stripped to the point that it weighed no more than 1,200 pounds. To facilitate its progress through sand and soft mud, fat tires were taken from wrecked airplanes, and the Ford's wheels were cut down to accommodate them. A platform body with two bucket seats was used.

The result was a fairly useful vehicle, capable of outperforming belt-tracked machines in traversing swamps and soft ground. Yet the Model T engine developed only 20 horsepower and of course lacked four wheel drive. Clearly, further development was called for.

In 1931 Walter C. Marmon, head of the Marmon Motor Car Company, teamed up with Arthur Herrington to build four-wheel-drive trucks. Herrington had been a military transport engineer, and Marmon's company was a veteran producer of quality automobiles, among other things.

Initially, Marmon-Herrington produced heavy trucks for the United States and Belgian Armies; but in 1936 -- by which time Marmon was long since out of the automobile business -- Marmon-Herrington conversions began to appear on Ford V-8 half-ton trucks and even on Ford passenger cars. Light, fast, and flexible, these machines could plow their way through almost any type of obstacle course devised by the Quartermaster Corps. The U.S. Army bought 64 of them, and they proved to be so popular that the men referred to them as "Our Darlings."

On the next page, learn why the 1937-1939 four-wheel-drive vehicles would be considered for military use and eventually lead to the first World War II jeep.