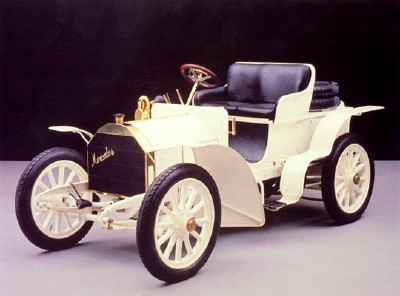 The Mercedes-Benz archive describes this car as a 1902 Mercedes Simplex. Its T-head inline four was cast in pairs, and it developed 35 bhp from 364.4 cubic inches-quite impressive for its time. It was mated to a four-speed gearbox with gated linkage. See more classic car pictures.
©2007 Publications International, Ltd.

Historians are not in agreement, but the bulk of opinion is that the products of Gottlieb Daimler and Karl Benz, working separately in Germany during 1886, were the first automobiles. Automotive history did not begin with the 1901 Mercedes 35 HP, of course, because self-propelled vehicles had been known at least as far back as 1775. But until the mid-1880s all of them had been large, heavy, and inefficient, relying on steam power in one form or another.

The technological breakthrough that allowed the "horseless carriage" to enter the modern age was the use of petroleum fuel in lightweight, high-revving engines -- and this is exactly what Messrs. Benz and Daimler achieved -- separately. Though they lived within 60 miles of each other, they were not acquainted, and the great company bearing both their names wasn't established until 1924. Gottlieb Daimler didn't even live to see the famous "Mercedes" name on one of his cars. He died in 1900, unhappily, protesting that he still had years of work to do.

The first "Mercedes," the great 35 HP of 1901, was conceived by Daimler's distributor in Nice, the formidable Emil Jellinek: Austria-Hungary's vice-consul in the city, a seller and sometime racer of Daimler machines, a scion of the Hapsburg establishment. Writer David Scott-Moncrieff described Jellinek as "a small, excitable man -- in the matter of cars, like Toad of Toad Hall -- whatever he had, he wanted something bigger and better."

Jellinek especially wanted light cars, which was an uncommon idea in those days. He yearned for a "mechanical greyhound." Wilhelm Maybach and Daimler's talented son Paul set to work on a Daimler to meet his specifications. Jellinek encouraged them, promising to buy the first three dozen. He also selected the name Mercedes, after his 10-year-old daughter.

As often, things didn't quite go as planned. Daimler was able to complete only six cars by January 1901, and there was no time for a shakedown run before the Grand Prix of Pau in February, which was to be its racing debut. The race proved a fiasco. Both engine and gearbox were troublesome and the Mercedes retired after running only a few yards.

But things were different at Nice, where the Mercedes of factory driver Wilhelm Werner dominated events. The 35-bhp Mercedes was fastest in both the sprints and hillclimbs, and also won the 393-km (244-mile) Nice-Aix-Senas-Nice road race that climaxed the proceedings.

Today, 35 horsepower from a six-liter engine in a car weighing 2,200 pounds seems very pedestrian, to put it mildly. But it was truly sensational by the standards of 1901. The four-cylinder engine, with its camshaft-operated intake valves, was quite advanced, and gave the car a higher power/weight ratio than most others of the time.

Also, the Mercedes handled better than any other car yet seen. The secret was in its squat stance. The earlier Daimlers Jellinek had been racing were bulky, over twice as heavy as the Mercedes, and relatively high on a short wheelbase. The resulting instability was thought to have caused the death of a driver in the La Turbie hillclimb of 1899.

But the Mercedes was altogether lower and sleeker. Its hoodline was little higher than the tops of its front tires, the chassis side members rode at least six inches nearer to the ground, and its driver sat closer to the midpoint of a longer wheelbase and behind a considerably more raked steering column.

On the next page, learn about the features of the 1901 Mercedes 35 HP.

With the 1901 Mercedes 35 HP, automotive design made a complete break with the horseless carriage. By comparison with this Mercedes, contemporary Benz models seemed archaic. It is by no means exaggeration to say that the 35-bhp Mercedes was the key model in the evolution of the early automobile.

In general layout, the car faithfully followed the Systeme Panhard, except for its mechanically operated intake valves (most cars still relied on "automatic" induction). The T-head layout would look familiar to any lover of early American cars. So, too, would the cast iron block, with its cylinders cast in pairs, fixed to a light-alloy crankcase.

But several features made the Mercedes a true pacesetter. These included a pressed-steel chassis (at a time when many manufacturers were using wooden flitch-plate construction), a four-speed gearbox with gated linkage, pedalactuated internally expanding drum brakes for the back axle, and a handbrake drum on the gearbox countershaft. While not revolutionary in layout, the transmission was already used by some other makers -- and almost every make would adopt it in the next few years.

Immediately behind the transmission was the differential, from which two countershafts -- actually driveshafts-ran to sprockets mounted outboard of the main frame members at either side. Final drive was by chain to the rear wheels, the wheel sprockets being mounted close to the drum brakes. On most cars that followed, the shift lever would also be outboard of the frame, but on the original racing Mercedes, with its skimpy two-seat body, the lever was pivoted at the base of the steering column.

With all this, no wonder the performance of the new car was so outstanding. So much so, in fact, that the secretary of the Automobile Club of France, Paul Meyan, was moved to say, "Nours sommes entres dans 'ere Mercedes" -- "We have entered the Mercedes era."

The competition success at Nice and sales success that followed throughout the year proved to be a real watershed in the affairs of Daimler Motoren Gesellschaft. Many new Daimler models had been issued in the last years of the 19th century, but after 1901 there were no more. (Daimler Ltd. of Coventry, England, founded to build Daimlers under license, became independent after 1900.)

From now on, the German company would produce the "Mercedes," which was adopted as its official name as soon as all legal formalities were ironed out. That name has graced most every Daimler and Daimler-Benz car ever since. The Daimler marque, therefore, passed from the scene in Germany just a year after its founder, though the name would survive proudly in the corporate title.

The story of Daimler in the next six years largely involved the big four-and six-cylinder cars that could be called the "Maybach generation." All were evolutions of the brilliant 1901 35 HP, and comprised both touring and competition types. Purists, incidentally, should note that while Jellinek's daughter always spelled her name with accents, they have never been used on the cars.

On the next page, see the specifications for the 1901 Mercedes 35 HP.

Brakes: Internally expanding on the rear axle; hand brake on the gearbox countershaft