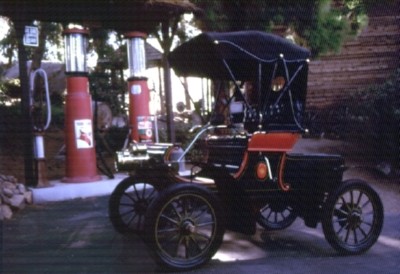 The Oldsmobile Curved Dash was named, as you can see, for its distinctive shape. See more classic car pictures.
©2007 Publications International, Ltd.

The unassuming Curved-Dash Oldsmobile is significant not only as the first best-selling American car of the 20th Century, but as a car that saved its maker. Had it not been as popular -- or "rescued'' from a disastrous fire -- Oldsmobile might not have lasted past 1902. Just as important, the Curved-Dash was everything "horseless carriages" had to be to become a permanent part of this century's landscape: versatile, available, and most of all, reliable.

Its story begins with Ransom Eli Olds, born in 1864 in Geneva, Ohio. His father, Pliny Olds, repaired machinery, a trade "Ranny" began learning at an early age. By 1880, the family had settled in Lansing, Michigan, then a town of about 2,000, where papa Olds and his older boy Wallace set up shop as P.F. Olds & Son, "practical machinists" specializing in castings and steam engines.

Ransom, meanwhile, attended high school and took an accounting course at a local business school, the latter enabling him to join the firm in 1883 as both machinist and bookkeeper. The business was incorporated in 1890, when Ransom bought out his brother's share. He became sole proprietor when their father retired four years later.

All the while, Ransom tinkered with horseless carriages, building a three-wheeled steamer by 1887, an even better four-wheeler in 1891, and another in 1992. Yet that first car was enough to persuade Edward W. Sparrow and Samuel L. Smith, lumber and copper magnates, respectively, to give him $30,000 to start the Olds Gasoline Engine Works 1890. Despite its name, this firm made small steam engines, "gasoline" referring to the fuel that fired their boilers.

Still, Ransom recognized the internal-combustion gasoline engine as the most promising for motorcars, and in the summer of 1896 he built his first such automobile: a small machine with a five-horsepower water-cooled twin, chain drive, two-speed planetary transmission, and a top speed of 18 mph, Sparrow and Smith saw potential profit in this rig, and gave Ransom another $50,000 to set up the Olds Motor Vehicle Company that August.

Ransom wanted "to build one carriage in as nearly a perfect manner as possible," but his workers managed four (some say five) within three months-then walked out. Sparrow soon followed, but Smith still believed, and in May 1899 put up $350,000 for yet another a new venture called Olds Motor Works, which absorbed the two previous companies. Because Smith and his sons Fred and Angus were Detroiters, Ransom became one, too, setting up a new plant -- the first specifically erected for car production -- on Jefferson Avenue near the Belle Isle bridge.

On the next page, learn how a fire in the Olds factory spurred on the development of the 1901-1907 Oldsmobile Curved-Dash.

Development of the 1901-1907 Oldsmobile Curved-Dash

Over the next year, Olds Motor Works built some 11 cars, evident prototypes toward a two-cylinder seven-bhp "Oldsmobile" (a name registered in 1900) announced at $1,250. But the new firm attracted little interest, and was soon looking terminal.

Oddly, Ransom seemed more interested in playing with electric cars (he built at least two around the turn of the century) and garnering more patents for various inventions like a crude self-starter, which would be perfected by Charles Kettering a few years after William C. Durant added Oldsmobile to his fledgling General Motors in 1908.

Destiny intervened in March 1901 when a fire ravaged the Olds factory. The losses, valued at a then-staggering $72,000, included all of Ransom's prototypes-save a "one-lung" single-seat runabout with a gracefully curved front, or "dashboard" in carriage parlance.

A long-told story was that a worker risked life and limb to push this little car from a burning building, but subsequent research indicates the firm had already settled on this as its first product, and would have been able to build it from detailed drawings that survived the blaze.

Regardless, the Curved-Dash became the first production Oldsmobile, and was in production by late 1901 -- in Lansing. Though Olds Motor Works maintained a Detroit presence for a few more years, Ransom built a new factory near his hometown after the Lansing Chamber of Commerce simply gave the company the 52-acre site of the former state fairgrounds.

Appearance aside, the "Oldsmobile curved-dash runabout" was much like many other early century cars: simple and cart-like-truly a carriage without the horse. Its "drivetrain" followed that of Ransom's first gasoline car save for a single-cylinder engine, though still with side valves and water-cooling, and also placed beneath a two-passenger buggy seat.

A horizontal radiator was mounted under the floorboard, where a foot lever was provided for controlling speed. The ignition system included dual batteries with a suggested life of 3-4 months. Supporting the body, with the then-customary wood-and-fabric construction, were 55-inch-wide tubular-steel axles mounted 60 inches apart and connected on each side by a long truss-shaped leaf spring that was flattened in the middle for attachment to a rectangular frame of channel-section steel. Steering was by tiller, the steering wheel being far from universal yet.

Braking, or what passed for it, was by a foot pedal that caused a clutch band to grab a flange on the drive sprocket. There was also an emergency brake: a drum on the transmission jackshaft (between low and reverse) acting directly on the rear axle. Wheels were 28-inch-diameter wire- or wood-spoke units mounting three-inch-wide tires. With the four-gallon fuel and water reservoirs full, curb weight came to a feathery 700 pounds.

On the next page, learn about the later models of the Oldsmobile Curved Dash.

Easily repaired by most any blacksmith and able to withstand the rugged, rutted roads of contemporary rural America, the Oldsmobile Curved-Dash found immediate acceptance at its $650 asking price-stiff, but not outrageous for the time. Only 386 were built in trouble-plagued 1901, but Olds turned out 2,500 in 1902, enough to claim the title as the best-selling car in the nation's infant auto industry.

Olds repeated as number one in 1903 with higher sales of exactly 4,000. Useful accessories contributed to this success: a rear-facing "Dos-a-Dos" auxiliary seat ($25), folding top (with roll-up rear curtain) in either rubber ($25) or leather ($50), and a "storm apron," little more than a large, heavy blanket.

More significant to sales were the Oldsmobile's fine showings in the speed and durability trials so popular in the early years of "automobiling." In 1901, employee Roy Chapin -- later of Hudson fame and one of several Olds people who would leave their marks at other companies -- drove a Curved-Dash from Detroit to New York for the nation's second annual auto show as a publicity stunt. It took a week, but he made it, which in those days was all that mattered.

The following year saw Oldsmobile taking victories in a Chicago endurance run, two five-mile contests in St. Louis, a Chicago Automobile Club meet, and first-in-class in a New York-Boston reliability trial. In 1903, a Curved-Dash made news by trekking from San Francisco to New York City in 60 days. Two years later, cars dubbed "Old Scout" and "Old Steady" were among the finishers in America's first transcontinental auto race, a 4,000-mile jaunt from Portland, Oregon, to New York.

Olds Motor Works naturally trumpeted such feats as proving its product's reliability, and the U.S. Post Office lent its endorsement by purchasing Olds-mobiles as the first mail "trucks." But the little car was also simply portrayed as a sensible substitute for skittish old Dobbin. "Nature made a mistake in giving the horse brains," said one ad. "Science did better and made the Olds-mobile mechanically perfect." Another ad touted the Curved-Dash as "the original and best [automobile]. Noiseless, odorless, speedy, sturdy, safe ... flexible in gear, responds instantly to the will of the operator. Gets up and down stairs, and stops anywhere along the way."

The Curved-Dash also changed, if not very much, receiving a six-inch longer wheelbase and a bigger-bore seven-bhp engine for 1904, when it was redesignated Model 6-C (previously Model R). The price was still $650, but a pert $850 light-delivery "express" version arrived, and there was even a $450 "railway inspection" model with appropriate train-track wheels.

But bigger, more powerful cars were increasingly on the scene, and the Curved-Dash couldn't last forever. Ransom Olds disagreed, however, and departed the company in 1904, leaving money man Fred Smith to bring out the costlier, more elaborate Oldsmobiles he favored. These were just Curved-Dash variations at first, but two-cylinder cars bowed in 1906. By the time the last Curved-Dash was built, in 1907, Olds was offering four-cylinder cars and readying its first sixes.

Upshot Ransom ended up treading this same path when he moved -- literally down the street -- to start the Reo Motor Car Company in late 1905. Reo, a name obviously derived from Ransom's initials, was soon outselling Olds Motor Works, and would go on to become a major industry power, only to expire as an automaker in the Depression. Oldsmobile, meantime, fell from the number one sales spot after 1905 -- ironically, just as the ditty "In My Merry Oldsmobile" was becoming a hit -- and has not reclaimed it since.

But the happy little Curved-Dash had saved Oldsmobile from an early grave while establishing a reputation that served the make well for years afterward. In fact, the Curved-Dash is still sometimes trotted out when the Oldsmobile Division of General Motors wants to remind people of its long history as an automotive pioneer. Any why not? Few makes can claim a more felicitous start.

On our final page, you will find the specifications for the 1901-1907 Oldsmobile Curved-Dash.