by the Editors of Publications International, Ltd.
Prev NEXT
16 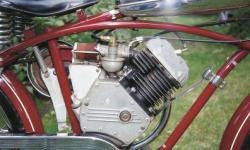 In the years after World War II, Whizzer offered a three-horsepower engine that could be bolted to a conventional bicycle to turn it into a rudimentary form of motorized transport. "Put a Whizzer on it!" trumpeted the ads, and thousands did. The company soon came out with a complete motorbike, the Whizzer Pacemaker, which some credit with starting the scooter revolution that led to the company's demise in the mid-1950s.