by Chris Warren
Prev NEXT
3 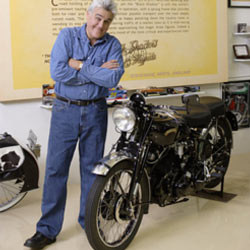 Well before The Beatles landed on the shores of the United States and kicked off an era of music defined by British bands, a number of U.K. motorcycle companies were making bikes highly sought after in America. Among the more notable companies that saw success exporting their wares to the States was Vincent, which was founded by Philip Conrad Vincent. According to Cerilli of Vintage Motorcycles Online, Vincent began designing an innovative rear suspension while he was studying mechanical engineering at Cambridge, a design he incorporated into his first Vincent motorcycle.

These days, the Vincent Black Shadow is an especially valuable motorcycle -- fetching between $75,000 and more than $250,000 -- because only 1,700 were made and because of the features it boasted when first released [source: Cerilli]. For instance, Wagnon of the Motorcycle Mechanics Institute says that the 1948 Vincent Black Shadow was probably the fastest mass-produced motorcycle of its time. "This was truly a 100-plus mile-per-hour motorcycle in the time of 60-mile-per-hour bikes. They were fast and powerful and advanced for their time," Wagnon says. "Every vintage collector, including myself, would love to have a Vincent."

Move ahead to find out how a jack-of-all-trades company made a splash with motorcycles.